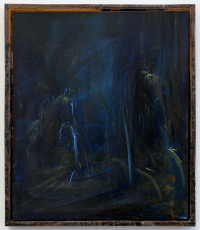 In Patricia Highsmith’s story The Pond, a recently divorced mother tries desperately to pluck her small son from the entangled weeds of the deep, dark pond behind their house, which has lamentably become the boy’s watery grave. This is the muculent mindset one partakes in when viewing this recent important Tyne Gordon exhibition at the Jonathan Smart Gallery.

The artist continues to carve out her own distinctive visual language where the natural is uncannily fashioned into the artificial. In much the same way that the films of David Cronenberg catalogue the horrors of our bodies, Gordon’s works signal the abjectness of the wilderness.  It’s no mistake that one of her paintings takes its title from Cronenberg’s Scanners. A scanner is a telepathic curiosity and according to a character in the film, the scanning experience is often a painful one, resulting in nose bleeds, ear aches, stomach cramps and nausea.  Gordon’s current body of work revels in the extremes of a fabricated, doomed reality, like the one featured in Lars von Trier’s Antichrist, where nature is a sinister force out to wreak havoc.  In the paintings there is a recurring splashing motif which divulges itself in a gestural divertissement of ascension versus descension.

The paintings in Wet Plate particularly exhibit a cinematic immersion in which concealment is a formidable currency. Tarkovskian submerged weeds perform a glissade beneath icy layers of Aegean blue in Watery Grave II. A swarm of spectral layers compete for space on primarily small to medium sized aluminium surfaces, nestled within fleshy frames concocted of a singular alchemical process. Ambiguity is an imperative implement, even in Gordon’s titles, the brevity and evocativeness of which recall the pared back later poetry of Paul Celan.  These works share a strong interest in the skin of things, through both their antithetical combination of organic and inorganic materiality and their enveloping titles. For example, despite the contrasting mediums of Carapace and Monotreme, their mutual waxy armour has the viscous tactility of an inbred alien membrane.

There is also something foul and acrid about Gordon’s buggered fountains, Monotreme and Moth, and the four rotten eggs perched atop Monotreme look as inedible as anything a waste collector might encounter on a particularly pungent haul. These nebulous eggs appear diseased like the fleshy game pods featured in Cronenberg’s eXistenZ, in a perversely delectable way, and treacherous like the Monotremata of their namesake.

There is a relentless cohesion between image and object which sees Gordon’s gothic imagination spawning ecological disasters in which the toxicity of the landscapes are born of Chernobyl-like proportions. For all the exhibition’s slimy impenetrability, there is an endearing warmth to the pieces through their do-it-yourself construction, which foreground Tyne Gordon’s idiosyncratic sense of acuteness.