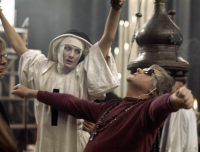 Wound licking. Nuns biting nuns. Self flagellatory priests… Director Ken Russell’s cream and beige symphony to Satan may be “Lewd, wanton” in the words of the film, but also historically accurate in many respects.

At the time of making the film, Ken Russell was surprisingly a devout Catholic and apparently “very secure in (his) faith”, which is all the more astonishing due to the film’s themes of sexual repression, abuse of clergical power, and the hypocrisy of the Church. In an interview, Oliver Reed stated that the Catholics vs Protestants theme was heavily influenced by the then ungovernable “Troubles afflicting Northern Ireland”.

The gleefully perverse visual intoxication and high camp that Ken Russell’s films are revered for were first truly consecrated with The Devils, and perhaps again only transcribed to lesser effect in eccentric later outings such as Crimes of Passion, Gothic, and The Lair of the White Worm.

In 1964 Russell planned to adapt A Clockwork Orange but the British Board of Censors advised they would not approve it. Still, some of Burgess’ influence seems to have found its way into The Devils, particularly the energy and cynicism of the novel, and the film’s menacing blood red title card still is reminiscent of imagery from Kubrick’s then recent cover version.

Bosch, Fellini and Jodorowsky also loom large. Russell insisted on anachronistic, even futuristic set design and production designer Derek Jarman(!) accordingly dislocated historicity by basing his sets on Fritz Lang's Metropolis. Through his art, Ken Russell always struck me as potentially unhinged (his philosophising son once even stalked me on Facebook), for example, he was responsible for accidentally detonating a large portion of the film’s set.  Also, a legendary lost TV debate between the director and an excessively harsh critic apparently became so heated that Russell walloped the critic over the head with a newspaper featuring the antagonistic review.

IMAGES
1. Ken Russell and Vanessa Redgrave on the set of The Devils