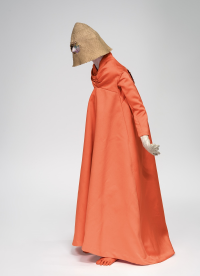 Warren Feeney:  How did the exhibition come about and why now in Ōtautahi?

Felicity Milburn:  It has been cooking slowly for a long time! Not long after Jealous Saboteurs, the touring survey of Upritchard’s work, here in 2017, our Director, Blair Jackson started talking with Francis about the possibility of a project of new work, made especially for Ōtautahi. She has very strong connections here.  It’s where she went to school, studied at the University of Canterbury, and made some of her first works. Her parents and many friends live here and she visits regularly. Quite early on, too, a group of supporters were able to visit her studio in London and through the Gallery’s Foundation they and others offered to support the show.

Francis came here for an initial visit in summer 2019/20 and returned in April 2021 as the inaugural artist in residence at the W.A. Sutton House, a new residency founded by Christchurch Art Gallery, the University of Canterbury and the Sutton Heritage House and Garden Charitable Trust. Her experience there was formational to the exhibition; allowing her to establish the ideas she would explore, giving her time and a studio to make work in, and the opportunity to make and renew connections with fellow artists, writers and supporters.

Collaboration was a big part of the show from the beginning.  When she first began conceptualising a show for Christchurch, she was thinking about the city’s recent history; the devastation of the earthquakes, the horror of the terrorist attacks.  These are overwhelming problems that affect all of us and can only be solved if we work together, which of course is also true for the global challenges we face with the pandemic and climate change.

This idea also resonates throughout the works in Paper, Creature, Stone, with the lonely struggle of Sisyphus set against many examples of people working together; most explicitly in the form of two characters from Japanese folklore – Ashina-tenaga (Long Legs and Long Arms) – who symbolise harmonious working relationships. In one of the big balata (wild rubber) pieces, Eeling in the Ōtakaro, this pair are seen using their unique combination of limbs to fish, with the artist relying on us to imagine a waterline just above the writhing eels.

Collaboration isn’t just a theme in Paper, Creature, Stone though; it’s a fundamental part of how the works were made. Francis worked with artists, craftspeople, experts and friends to make these works, including Taranaki potter Nicholas Brandon (who threw the beautiful vases, pots and bowls she has glazed), Brazilian artist Darlindo (who helps her source sustainable wild rubber from the Amazon), London-based glassblower JochemHolz, Ōtautahi fashion designer Steven Junil Park (who made the clothes for her sculpted figures) and Wellington jeweler Karl Fritsch (who made the amazing rings that glisten on their hands).The ceramic masks were made during time she spent with other artist-friends at Driving Creek pottery in Coromandel, founded by the celebrated artist and conservationist Barry Brickell.

Many other people were involved too – sculpting the large sculptures from balata is a very demanding physical task that has to be done fairly quickly in warm and then cold water, so Francis was supported by a small team of helpers to make sure she had what she needed at the crucial moment.  She described the sculpting process as a bit like surgery. She also sourced old clothes and accessories from friends and op-shops, and her friend, the writer Gwynneth Porter, wrote a beautiful text about the project for the Gallery’s Bulletin magazine. Francis enjoys how these collaborations, big and small, create outcomes she can’t predict, and challenge her to relinquish control, at least a little!

WF:  My initial experience of Paper, Creature, Stone was the extent to which all the works, in terms of their genre, seemed keen to “undermine” the category that they represented in relation to an ‘art-world’ category.  For example, the works on paper framed and held by large stones at each corner.  It gave me this feeling that each work was there to rattle any ideas about certainties on many levels.  Upritchard seems to be asking all of us to look and reconsider anew pretty much everything we hold to be true.  Yes?

FM:  I think that’s very true. We’ve described the show as ‘rewarding for the curious’ and it is definitely about getting people to process what they are actually seeing, not what they expect to see. The architecture and furniture of the Gallery space were part of that, considered as carefully as the works.  Francis worked closely with our exhibitions team, especially designer Chris Pole, to get custom vitrines and shelves fabricated, so that things were presented in a way that felt elegant, but also odd and unexpected – hanging cabinets, narrow doorways, wood leaned against walls, huge shifts in scale and yes, those amazing ‘floating’ stones. It’s all part of what she has been doing with her works for years – holding up weird little pieces of the world we’ve forgotten about and showing them to us in ways that make us recognise how fascinating they are.

WF:  Artist and writer, Terrance Handscomb  has commented that Francis Upritchard’s arts practice does not belong to Modernism’s ‘intuitive knowledge of deep truths.’ For me, this definitely looks like one of the exhibition’s agendas, or subtexts.  Yet, somewhat contrarily, I also see this strong element of surprise in her work, as a familiar Modernist idea about innovation and creativity.  What are your thoughts on this?

FM:  I’d say that her works actively undermine the idea that there is one way to see or value things. She often focuses on objects or processes that some might consider ugly, too-ordinary, or misshapen. It is how she brings these things together– all those small decisions about finish, juxtaposition, context – that gives them power and resonance; that, and the inevitable associations they prompt in us as viewers.  They’re incredibly specific, suggestive objects, but they’re also pretty slippery ones. Many of the forms she is attracted to – like the ceramic vases and pots – have been part of human consciousness for a long time.  They make me think of the amphorae discovered in Byzantine shipwrecks.

WF:  Artist and writer Ralph Paine comments on Francis Upritchard titles for her work:  A name is all that’s minimally required for us to get Upritchard’s singular, dual, collective modes of existence:  [for example]: Giver, Taker, Hannah, Tourist, Jockey, Sun Worshiper, Mandrake, Echo Chamber, Land, Jealous Saboteurs.     Do you see this one-word description of Upritchard’s work as outwardly promising a means of entry into it, yet on every occasion, opening a door to something beyond words and a single idea?

Her titles, which I often really enjoy, usually pick up on something easily recognisable in the work, rather than something more abstract. They’re identifiers, often quite drily funny ones, that don’t give you much information, but are an interesting place to start. They almost never answer the most immediate question you might have, which is: why these things together in this place? I guess one answer to that is: because you’re here, and they’re there – you’re just two objects in a room, looking back at each other.