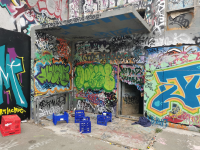 Writing about urban art is difficult. Not because of a lack of content, but rather because the complexities that come with the evolution of ‘street art’ can leave an uneasy nagging feeling. The question of authenticity constantly hangs like a storm cloud, an enduring doubt around the way we now discuss urban art. As an urban art commentator, I constantly grapple with the fact that increased visibility and acceptance not only affords opportunity to artists (and supporting figures such as writers), but also significantly alters the construction and presentation of graffiti and street art. No longer exclusively a disruptive voice in the streets giving a middle finger to authority, it is easy to feel like a punk who replaced their mohawk with a business suit. Over the last few weeks a number of narratives have fed into this contemplative second-guessing, the consideration that maybe the American artist Sever was right when he painted street art’s funeral on a Detroit wall back in 2012.

Over the closing weeks of February, Melbourne hosted Can’t Do Tomorrow, an urban arts festival that sought to “inspire (as well as invest in) a new generation of talent…” and “ultimately… question the very nature of art itself.” The event considered the complicated aspects of contemporary urban art in a wide spectrum of presentations, including murals, installations, exhibition booths, screenings and discussions. But there are always difficulties around such a project: many invited artists are today more likely to work on a commissioned mural rather than a rebellious street intervention. A difficult fit for the anonymous and disruptive aspects of illegal street work, can large-scale events like Can’t Do Tomorrow avoid furthering the chasm between the divergent strands of urban art?

Likewise, recent discussions around copyright protection for urban artists, including Wellington artist Xoë Hall’s Bad Exposure campaign, reflect an important issue in the contemporary environment, both entirely valid and necessary in the context of corporate exploitation, but also intriguing when considering illegal or unsanctioned interventions. In a way, these discussions signal the movement away from the more immediate experience of urban art as a feature of our surrounding environment, towards a commodity.

These examples, along with personal discussions with artists reflecting (often wistfully) on the freedom afforded by working in the streets without permission, have given me pause to recall the original enticing energy of urban art, an art form that existed outside of institutional mechanics. I am an admitted advocate for people using the streets in creative, disruptive and unsettling ways, inviting us to see things differently and consider the power structures at play in the urban environment, and yet, I also face the reality that much of what I do also moves urban art away from this position. It is an uneasy tension, one that likely cannot be resolved, but is good to acknowledge, a reminder that while things need to change, there is also an importance in honouring certain performances, and in the case of urban art, staying just a little bit naughty.