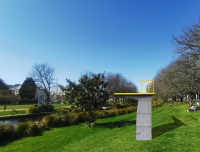 Originally a featured work in SCAPE Public Art Season 2019, Natalie Guy’s The Pool will soon have permanent residence along the Ōtākaro Avon River Precinct opposite the Antigua Boat Sheds.

The Pool is a diving board within reach of water but not close enough to be functional.  Conceived by Guy with a history of contemporary art and architecture in mind, its subject acknowledges British architect Jane Drew and her modernist 1950s buildings and their utopian ambitions, as well as David Hockney’s early California swimming pool paintings.

Guy maintains that she didn’t want it to be a pure replica of Drew’s original work.  ‘I am not just rebuilding a piece of architecture.  That is always a big consideration in my work. With Drew’s board the original has a red top but I deliberately changed it to yellow, recalling David Hockney.’

In the 1950s, Drew was employed in the city of Chandigarh in India, designing buildings and amenities that included a civic swimming pool. ‘Pools would have been a rarity in 1950s Chandigarh. Much like the city itself, which is an isolated island of modernist architecture, it harbours a sense of other-worldliness.’

‘I went to Chandigarh in 2017 for a residency in Varanasi.  I looked at an awful lot of Le Corbusier’s work and wandered around the city and noticed that there was a lot of modernism, little commercial areas and civic buildings by artists who weren’t Le Corbusier.’

‘I bought a lot of books of architecture and when I got home I noticed one little photo of a diving board by Jane Drew.  I had a friend running a performance residency in Morni Hills above Chandigarh and asked if he knew any photographers who might be able to hunt out this object and he did.  He sent back a pile of photos.’

‘Drew was a British architect and urban planner, so I was really interested that she was in Chandigarh building things like that diving board. That certainly wasn’t a time when swimming was a social sport or big activity but she had promoted the idea of sport and this little civic centre with the pool and board.’

‘I grew up in Whangarei and there is an Olympic pool there with a very modernistic looking diving structure and it reminded me of that as well.  So it all came together.’

‘I started a doctorate in 2018 at the Elam School of Fine Arts.  I had been making all sorts of work and a lot of it was loosely about modernism.  The Pool was the first work I did in that year and I have continued to address fragments of architecture and pieces that relate, for me, back to New Zealand.  It is not just about international buildings or the international style but also how that has influenced New Zealand.’

‘I hope that The Pool will resound in the memories that people have of pools and swimming from that era.  Most New Zealanders recognise those sorts of architectural details because they proliferated even in small towns.  There is some conscious memory of simpler times and all that sort of thing.’

‘I am really pleased it has got a permanent home.  At the time The Pool was previously with SCAPE, Deborah McCormick told me there have been architects working along this monolithic scale during the 1950s designing homes in Christchurch and that is a really nice way to make a connection back to it.  Much of Christchurch's modernist history has arguably been lost through the earthquakes, and I think The Pool could have an interesting conversation with that history.’