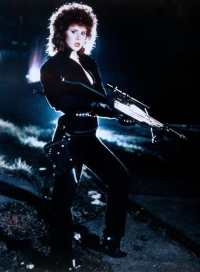 In Summer of Fear (1978), Linda Blair plays the cousin of a sultry teenage witch who comes to stay after the death of her parents and gradually proceeds to ruin Blair’s character’s life.  In what, on paper, should have been a success (a Wes Craven witchcraft movie anyone?), Linda Blair proves to be the sole reason to watch this made for TV turkey.  Although produced during the height of second wave of feminism, this was apparently still a time when witches were malevolent.

There was something about Linda Blair’s demeanour, and her slightly gravelly voice, that gave her a vaguely menacing, streetwise edge, but for this reason, her casting in Roller Boogie (1979) as the brattish daughter of a pair of snobby, pilled up millionaires is disconcerting.  The film can only be viewed now as terribly dated , but its palette is beautiful to gaze upon due to the lush cinematography of Dean Cundy.

In Hell Night (1981) Blair’s character perpetuates the young female victim archetype that is symptomatic of the notoriety of her iconic character in The Exorcist.   By this point Linda Blair had made the unequivocal shift towards appearing in exploitation cinema due to a series of casting misfortunes on the part of her somnolent agent.  However, these types of films deserve to be taken as seriously as Born Innocent, because if entertainment is the guiding imperative of many viewers, then fare like Chained Heat relentlessly delivers on all fronts.    Chained Heat, Red Heat, and the slummier Savage Island [1985]) could be perceived as spiritual sequels of sorts to Born Innocent.

In 1984 Blair delivered one of her most unforgettable performances in Savage Streets, a gleefully sordid mid-80s tale of sisterly vengeance set against droog-like violence which treats the deadly serious subject of rape with a maniacal dose of exaggerated physical camp making for progressively confusing and uncomfortable viewing.  Blair returns four years later alongside the esoteric bashing characterisation and chiselled musculature of a pre-Baywatch David Hasselhoff in Fabrizio Laurenti's Witchery (1988) aka La Casa 4, the film's Italian production lends it a menacing, dreamlike atmosphere.

Rick James, author of the anthem Super Freak and convicted kidnapper, was Linda’s romantic partner for two years, and wrote the hit Cold Blooded about her and stated “the title might have referred to the fact that Linda had an abortion.   She told me that it was our child but gave me no voice in her decision. I call that cold-blooded”. Linda has stated she chose not to have children because it would have been unfair bringing them into the dangerous post-Exorcist environment of mentally unstable stalkers and fixated religious groups. Regrettably, the ‘90s were an onerous era in the scheme of Linda’s career, as she attempted to survive wading through the abhorrent wilderness of Z grade productions such as Dead Sleep (1990), Fatal Bond (1991), and 1995’s Sorceress. A high point came in the form of a small role as an obnoxious reporter in the smash hit Scream (1996), directed by former collaborator Wes Craven.

Animals have always been hugely important to Blair, even taking whole years off during the 70s to compete in equestrian tournaments, and in 2004 she founded the Linda Blair World Heart Foundation, a nonprofit organisation that serves to rehabilitate and adopt rescue animals.  Since then, her acting has been put on the backburner. We can only imagine the trajectory Linda Blair’s film career might have taken had she not appeared in The Exorcist, but the truth is she would also have required a more tasteful casting agent, and to have refrained from drug use and appearing in softporn magazines.  Whatever the case, she has seared an indelible scar onto the face of pop culture and, in the eyes of most, will remain an eternally youthful totem for the scabrous discontent until the indubitable extinction of the human race.

Mark Kermode, The Fear of God – 25 Years of The Exorcist – Definitive Movie Documentary