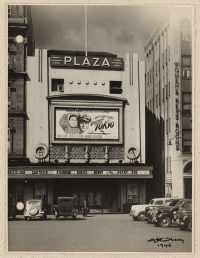 I’m feeling like a ‘bout of nostalgia for long forgotten picture palaces in Christchurch I’d love to share with you.  The appetite has always been strong in Ōtautahi for foreign language, independent, cult, festival films.  The major chains of the day Kerridge Odeon and Amalgamated Theatres both took a longer term view of that ‘thirst’ and it was not until the mid to late ‘60s when they woke up and attempted to cultivate a following for the discerning movie-goer at their picture palaces.

The first out of the gates in Christchurch was the Plaza Theatre in the south-west corner of Cathedral Square. It opened in 1917 as The Strand, decoratively in Art Nouveau style, stalls and circle amounted to around 700. In 1931 it was renamed and redecorated lined with green and gold panels.  A foyer and concession stand was introduced in the’ 50s in the upstairs mezzanine along with a more ‘continental’ art house strategy with Bergman titles front-lining…  It closed abruptly in November 1963, asset-striped and left for dead…

An application by Masters Theatres to turn the circle into a luxury 300 seat cinema was shot-down by the opposing chains with their big chequebooks (they didn’t want an independent setting up in the ‘entertainment hub’ in Cathedral Square).  Citing the hysteria, lawyers for the granting of the cinema licence announced the major theatres were ‘’ shooting butterflies with machine guns…” in order to protect their patch.  Those opposed to the granting of the application refused to believe the culture locally was up to supporting a permanent art house and was too pre-mature, although records show that the local film society was thriving.

Lang Masters had the last laugh and due to his tenacity opened the Academy Cinema in the Christchurch Arts Centre in 1976 in the old Canterbury University gymnasium with Carlos Saura’s Cria Cuervos, an intoxicating unique study on death from the perspective of a child.  Looking back at programming notes and schedules one could only revel in the Sunday Double Features held there:  Polanski’s Tenant and Rosemary’s Baby or Bob Rafelson’s Easy Rider and Head (a head tripping excursion with ‘60s pop band The Monkees).   I can only sit back and weep.  Oh what excitement I had there as a projectionist. Then I lived over the road at Rutherford House in a little shallow room which smelt of smelly socks and armpit ephemera.

The major improvement in fortunes for cinephile’s was the purchase of the old Rex Theatre in Riccarton Road in 1967 by Masters who turned it into the much beloved Avenue International Cinema.  It’s where the origins of the first film festival’s held in Ōtautahi  were born.  Being so close to the new Campus at Ilam, it became a firm favourite in the eyes of students and lovers of the ‘grain’.  When Elvis died they showed a little homage to his work.  My dad took me there to witness his hip gyrations and sneers.  I think it was Viva Las Vegas and Speedway.

But there was also dusk to dawn horror marathon’s which newspaper adverts screamed, ‘bring your ghoul-friend’. The sight of George Romero’s vile and rancid zombies in Dawn of The Dead no doubt cut short any further ‘slap and tickle’ on the other side of midnight.  Amalgamated’s cinemas response was a beautiful renovation of the Crystal Palace in the Square to the queen of ‘hip’ the Carlton Cinema , but that’s another story if the gods allow….