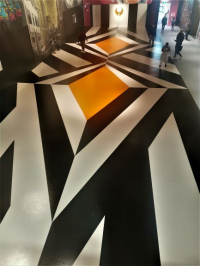 When the Canterbury Museum hosted Oi YOU!’s Rise Festival in 2013, the exhibition drew record numbers and won widespread acclaim. The transformation of the Museum’s main exhibition hall into a gritty, bustling streetscape filled with art, both in playful gallery spaces (such as the living room filled with Milton Springsteen’s reworked paintings) and painted directly on to the museum walls, signalled the global profile of urban art while also hinting at the blossoming local presence. When the exhibition ended in early 2014, the street scene was deconstructed and the murals painted on the walls were covered in long black curtains, with only glimpses available to inquisitive visitors.

With Hakē: Street Art Revealed, the Museum has taken the opportunity to unveil the wall works to the public for the first time in seven years, while adding to the Rise legacy with the creation of a prominent new work.  Joining the wall paintings by Askew, Berst, BMD, Drapl, Eno, Thom Buchanan, Wongi ‘Freak’ Wilson, Ikarus and Jacob Yikes, Auckland artist Benjamin Work was commissioned to produce a mural spanning the exhibition hall’s floor and sections of the walls to the east and west.

While bringing urban art credibility as a member of the celebrated TMD crew (the graffiti collective is currently the subject of an impressive survey show at Lower Hutt’s The Dowse Museum), Work also exemplifies the trajectories of those artists who emerged from graffiti culture but no longer fit neat categorisation, his art more concerned with a shared personal journey than the trends of contemporary urban practice that Rise sought to reveal.  Since 2011, Work has developed his practice by exploring his Tongan heritage and the iconography of his culture, specifically through the designs found on tapa, fala and ‘akau tau (war clubs).  Engaging with treasures in museum collections here in Aotearoa and further afield, Work has found new settings for Tongan visual culture via installations and public murals.

Drawing inspiration from the Museum’s collection of ‘akau tau, Work created the impressive floor-to-wall Motutapu II, a metaphoric gateway marking arrivals and departures of voyaging vaka (the title refers to a pan-Polynesian concept of sacred sanctuary islands encountered prior to arriving at the mainland).  The mural extends from two orange diamond shapes, described by Work as ‘matapā’ or ‘eyes of the pā’, with vertiginous, interlocking blocks of black and white leading the viewer towards either end of the hall.  At the eastern end, a māhina (moon) glows in mottled orange, while to the west, a Tropicbird soars above three figures symbolising Tonga’s Chiefly lineage.

The work is an exercise in exploration and voyaging, encouraging viewers to enter the work while providing sacred icons as framing points, (importantly placed on the vertical walls where the public cannot walk over them).  Using a strikingly refined graphic style to engage a meaningful cultural dialogue, Motutapu II is a fitting addition to the Museum, raising questions about the access to and engagement with cultural artefacts, while also extending the discourse around the performances of contemporary muralism.

Rise was a significant milestone in Ōtautahi’s post-quake urban art story, an event that introduced many to the wide spectrum of graffiti and street art and raised the profile of the city as a creative destination.  With Hakē: Street Art Revealed, the legacy of Rise is both revisited and expanded, highlighting the evolution of artists who now refuse simple definition as they push their work in new directions.
DETAILS

+ Text Size -
Do NOT follow this link or you will be banned from the site! Original generation time 1.4097 seconds. Cache Loaded in: 0.0006 seconds.