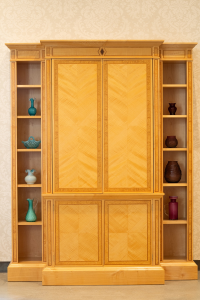 Ravenscar House Museum opens to the public in the first week of November.  Home to a private collection of New Zealand art, sculpture and classical antiquities that has taken on an additional life and presence it will be permanently open to the public seven days a week.

The Ravenscar collection is the gift of entrepreneurs Susan and Jim Wakefield to Christchurch, their initial plans for it to be displayed and open to the public in their Scarborough house reviewed after the 2011 earthquakes, leading to the decision to rebuild their house on a new site.’

Ravenscar House has been designed by Patterson Associates and its surrounding garden by Auckland landscape architect, Suzanne Turley.  Located opposite the Canterbury Museum, Ravenscar is administered by the Museum on land gifted by the Christchurch City Council.   As a house museum it is a hybrid; a home and public gallery that is a unique experience as a public space for exhibitions; comprising a foyer, four main rooms, a dining room, bedroom, living room and a library, collectively circling a central courtyard, its spaces resonating with a remembrance of the Wakefield’s Scarborough home.

Trustee and Trust adviser on Canterbury Museum’s curatorial team for Ravenscar House, Jenny May and Frances Lojkine (Susan’s daughter) have been responsible for the furniture and other objects that make the collection a unique experience.  May observes that Ravenscar is a house designed to accommodate a collection and it just works brilliantly.  ‘You could imagine yourself living there.   The architects have had to consider the design around the collection but they haven’t let that hold back the building’s design.  We have set things up to reflect how Susan and Jim had them in their Scarborough home however the new Ravenscar House does not reference the architecture of the Scarborough home..It is not a replication but a nod to it and it is a house I could have imagined Susan and Jim living in.’

The galleries/rooms all move around a central courtyard which also includes a roman impluvium (the sunken part of the atrium in a Roman house that carries rainwater off the roof) above a window with an expansive view to the garden.  May describes it as ‘a spectacular waterfall effect.’

The garden is a subject of interest in its own right, landscape architecture Suzanne Turley holding considerable discussion between the family and trustees about the choice of plants.  As May says ‘Susan had a large garden at Whitewash head in Scarborough and the Ravenscar garden reflects upon a relationship of a series of plants.  It is not the same as Scarborough but it mirrors the plant types.’

‘There isn’t a huge collection of outdoor works, Paul Dibble’s sculptures are the predominant ones with the main Dibble at the entrance that originally stood at the entry to the Ravenscar house on the hill. Its position in the Rolleston Avenue building reflects back to Susan and Jim entering their Scarborough home.’

May feels that ‘One of the things with Ravenscar itself is that it is a very modern house sitting in an area of older gothic  buildings but it has forms and peaks that relate to those buildings and its masonry is crushed brick and crushed stone from various earthquake damaged or lost places.  There is an aspect of it as an earthquake memorial, its materiality reflecting the older 19th century building of the Arts Centre and Canterbury Museum beside it.  It has a cultural historical connection to the city in a tangible and intangible way.  This idea was really there from the beginning and might not have always been explicit but it was implicit.  Patterson Associates have really considered its location, the siting and its relationship to the city.  It has been designed for that site and Susan was confident that while it should make a statement of its own it would also be very much part of the city’s urban fabric.’