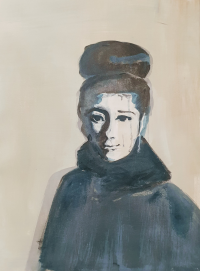 The title of Kim Lowe’s exhibition at Chambers Gallery is a variation on a quote by contemporary Asian American Taoist, Deng Ming Dao:  ‘If Tao is a River... it's good to know where the rocks are.’   The recipient of the Oliver Spencer Bower Foundation Award in 2019, Lowe comments that her new works relate to ancient Chinese philosopher and writer Lao Tzu and his ideas about life as being like a river.

The subjects of Lowe’s works on paper encompass landscapes and portraits, also principal subjects in Spencer-Bower’s practise, both artists considering their potential through their chosen medium, Spencer-Bower in the 1950s responding to British Neo-Romanticism’s abstracted images of the natural world and Lowe in 2020, utilising aspects of Chinese aesthetics and traditional brush painting.  Lowe acknowledges the ‘influence of Olivia's approach of painting portraits and landscapes of the people and land around her.’

There is also recognition in Lowe’s images of our attitude and experience of the land in the 21st century.    She comments, ‘there is something about tourism here, familiar landforms that get photographed and shared by hundreds of thousands of visitors. I have been attempting to paint them from a historical/faux historical point of view and maybe attempting to fill in the gap between New Zealand Chinese painters from the era of Olivia Spencer Bower.’

Kim Lowe, If Tao is a River