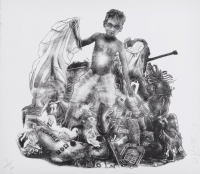 An encounter with Anthony Davies’ prints, whether in a publication or the space of an art gallery, is always a wakeup call. The imagery of his work could not be further removed from popular sentiment or the misnomer that the visual arts are somehow removed from the reality of life. The English-born printmaker resident in Aotearo New Zealand for more than 25 years makes prints that consistently confront us, out the need for a commitment to personal responsibility for the state and well-being of others and the planet.

Davies is a master printmaker, (an esteemed Fellow of the Royal Society of Painter-Printmakers) and knows about the history and potency of the print in Western art and its reputation for challenging social and political commentary. Yet, unlike his earliest predecessors, James Gillray (1756 – 1815) or William Hogarth, (1697 – 1764), don’t expect ironic commentary from him, famously Davies’ etchings, lithographs and lino prints do “bleak” rather than witty detached observation.

Davies’ art is a reminder that the visual arts, at their best, are not seeking to be popular, rather he sources his imagery from our daily diet of local and international news, capturing our attention through films and photographs of natural and human-made disasters and tragedies, repositioning our act of regular media consumption to one of considering and taking responsibility.

Disrupted Space at the Ashburton Art Gallery is a survey of sorts of his practice, bringing together two series of prints,  Surveillance, linocuts from 2014 of surveillance stills from security cameras and CCTV video stills, and prints from Plight of the Innocent, I and II, 2015-16, two series of images drawing from Reuter and television news, encompassing subjects that include global industrialisation and its damage and harm to the natural world and humanity, (with special attention to the young and elderly) crowded and constrained in an industrial world that by necessity is identified as home.

Disrupted Space is a timely and important reminder that the visual arts are not the voice of accepted opinions, or good-news announcements and happy endings. Rather, Davies prints confront us with open-ended questions, providing a perspective on our ways of thinking and reminding us of who we are and what we represent.