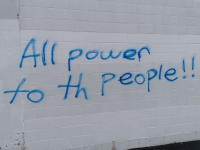 As protests have spread across the United States and the globe in response to the death of George Floyd and the long history of police brutality against black lives, there has been a notable visual aspect alongside the crowds of people: the art of protest. While there have been a number of legally produced projects, such as the memorial mural painted at the site of George Floyd’s death in Minneapolis, Minnesota, and the giant yellow text painted directly upon the newly named Black Lives Matter Plaza in Washington DC, guerrilla graffiti and street art interventions have also appeared in streets around the world, including a train painted with graffiti reading ‘Please, I Can’t Breathe’ by the 1UP crew. In addition, in a more immediate accompaniment to the protests, alongside the physical presence of chanting bodies calling for change, placards and banners have featured calls for action (“Defund the Police”), civil rights iconography, such as the raised fist symbol, and portraits of victims of police brutality. But perhaps most reflective of the urgency and anger of the protests has been the graffiti marking protest sites. Rather than the identity-centric hieroglyphic tags or dynamic pieces, this graffiti has been concerned with legible political declarations over style and aesthetics.

In various scenes, backdrops have been covered with slogans such as ‘Black Lives Matter’, ‘ACAB’, ‘RIP George Floyd,’ ‘Say Her Name: Breonna Taylor’, and more, creating iconic images that capture the poignancy of this time in history. The plinths of monuments, many with ties to the injustice of colonialism and slavery, have been transformed by layers of paint, a reminder of the potential to change the world.   Even here in Christchurch, messages such as ‘George Floyd Rest in Power,’ and ‘All Power to th[e] People’ have been sprayed on walls. In the wake of the earthquakes and the March Terror Attacks, messages of a similar nature appeared, voices of dissent in times of upheaval. The tactical use of graffiti in such a way recognises the potential of writing on walls to endure beyond the dissipation of vocal cries, as well as the need to disrupt deeply entrenched systemic issues by attacking the façade of their control. In stereo, the chants, signs and graffiti form a swelling voice, refusing to be ignored.

Graffiti and street art have always had the potential to make meaningful statements, either specifically, or through their method of intervention, questioning public and private space and declaring presence and identity in the face of neglect. However, increasingly, street art as it is framed so often by now has for many become about the shiny, and ultimately palatable, act of beautification, even when conveying an important message. Of course, the relationship between muralism and gentrification has been a discussion point for some time, but now it seems even more important. Murals can raise meaningful issues, but their means of production often place them in a compromised position, especially in relation to the direct discourse of wall writing. Sometimes it takes a jarring urgency of voice, as an image of graffiti recently posted by international street art festival Nuart that declared: ‘We want change, not a ‘mural’’.