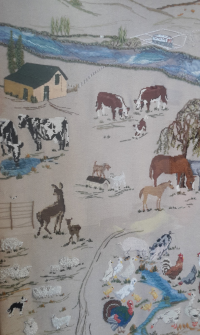 The Waimakariri District Council has established a public arts policy and a new charitable trust: WPAT, the Waimakariri Public Arts Trust, to oversee the delivery of the Council’s strategy.  It sets a welcome benchmark with an agenda that maintains, ‘public art projects will be most effective when they are part of a larger, holistic, multidisciplinary approach to enlivening a city or neighbourhood’. Its objectives also include the ‘integration of public art into the design and landscape of selected public spaces… where it will enhance the public’s enjoyment of public spaces’.

In a wider content, this is a decision that also builds upon the Council’s art collection policy and its formation in 1995 through the Waimakariri Art Collection Trust, the precedent for its conception represented in the prior example of the region’s long-standing arts community and supporters, and the work of its numerous and varied arts groups.   This includes the important contribution of weavers and craft artists in the Waimakariri in the 1940s and 50s, a six panel tapestry by “DRS”, a specific individual or the title for a community of artists.  Displayedin the Council’s offices in Rangiora, its subject is a panoramic and vertical landscape of its paddocks, hills and townscape of the Waimakariri region, celebratingits farming industries, historical buildings, rivers, landscape and people.

Over more recent decades, the progressive outcome of the opening of Chamber Gallery Rangiora, as part of the new Rangiora public library in 1997, and in 2015, the opening of the new multiplex Ruataniwha Kaiapoi Civic Centre in Kaiapoi as the site of its new library, museum and art gallery, Art on the Quay, are influential forerunners to the public arts policy. Both galleries are significantresources for the region’s community and visitors, the opening of the Ruataniwha Kaiapoi Civic Centre, attracting 24,000 visitors in its first month of opening.  Moreover, it is no coincidence that both Rangiora’s and Kaiapoi’s public art galleries are in their libraries, comprising the potential to be of service to existing supporters and develop new audiences for the arts from throughout the region.

Resident and curator for Art on the Quay, Jackie Watson, remains a long-standing arts advocate for the district and a board member of the newly formed Waimakariri Public Arts Trust, (also overseeing and curating the annual Art Expo in Kaiapoi held over the last weekend of July , its attendances averaging 5,000 visitors).   Watson maintains that the Waimakariri district is home to many artists across all disciplines with an estimated 300 artists working in the region.   Collectively, this makes for a close community that also extends to its Council: ‘The public art policy has been developed with the support of the Mayor, Dan Gordon who was also a founder of the Kaiapoi Art Expo and created a new arts portfolio for councillor Al Blackie. Former Mayor, David Ayers, has also been an avid supporter of the artsfrom when the Chamber Gallery Rangiora opened in 1997.

‘It took four years for Council to write the arts document.  A committee was formed last October and that has been notable for its inclusion of local artists and business people.  This includes Nicol Weber, owner and manager of the real estate organisation, One Agency, as well as local weaver and textile artist Wilson Henderson. Watson further comments that consultation for the policy has also included discussions with Executive Director of SCAPE Public Art, Deborah McCormack about contemporary public art and community engagement and the detail of the installation of public art.

‘We needed a public arts’ strategy and we now have one.  We have a new public sculpture by Andrew Drummond and it will be sited on the stop-bank near Art on the Quay.  The sculpture is kinetic and is part of a series of Australian and New Zealand leaf-shapes from the artist that rotate in the wind.  (These include:  Kowhai, Maho, Karo, Silver Gum and Blue Ash).  It is three metres in height and made from stainless steel, its various blades acting like a wave’.

Historically, Drummond has developed a number of wind-activated leaf form sculptures, distinguished by their rotational startup that commences in15 kilometre-hour breezes.  He details these works as fabricated from stainless steel, ‘all working parts are precision engineered to ensure a long life with no maintenance.  The sculptures are titled and numbered in the edition sequence.  Each edition is limited to nine’.

Detailing the wider context of his kinetic works in the publication, Andrew Drummond: Observation/Action/Reflection, the title of the Christchurch Art Gallery TePuna o Waiwhetū’s survey exhibition in 2010, kinetic works of art are represented in the artist’s practice in an early exhibition in 1973 at Dawson’s Gallery in Dunedin in a series of kinetic paintings.   Sydney-based writer Pamela Hansford makes a more recent connection to Drummond’s kinetic sculpture works from the Dubai Project in 2007, a group of twenty-one sculptures whose forms were based on kowhai seeds and pods.  Drummond’s skill and extensive knowledge across numerous disciplines are central to the realisation of this series, and characterise an arts practice that also encompasses performance, sculpture and installations, consistently realised through his extensive knowledge and experience, not only in the arts, but also in engineering and science, and his engagement with numerous materials and response to both nature and constructed environments.

Watson observes:  ‘the Waimakariri is growing and people are supportive of wanting the arts as a means to contribute to the betterment of the region and with the public arts strategy completed, we are working towards our steering group’s lead in increasing public art throughout the district’.