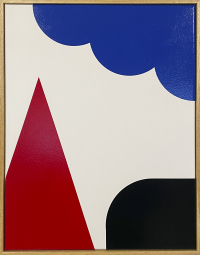 From the organisation that imagined and delivered the Art Fair to Auckland (now the Aotearoa Art Fair), TENT is a nationwide event over a long weekend from 4 to 7 November.  Described by co-director Stephanie Post as being both online and in real life, it is a response to her question:  ‘Is there something we can do to encourage people to go into galleries?’

Post maintains that TENT does not replace the Art Fair.  Rather it is an addition that sees galleries with a dual presence online and in pop-up exhibition spaces in Auckland, Christchurch, Cambridge, Hawkes Bay and Wellington for three days.

Post also acknowledges that it has materialised as an outcome of the 2020 Art Fair.  ‘It was cancelled six weeks out.  It was a massive hit for the Art Fair and 40 galleries and 100s of artists who had made work.  We put everything online for four weeks from April to May and the galleries sold $1.6 million of art with all the proceeds going to the galleries and their artists.  We started thinking about 2021 and what was good and what wasn’t about a presence online and the possibilities of taking art out of the gallery into other situations in public venues.’

Post sees TENT as a cross-over with galleries as pop-ups and installations expanding audiences and changing art experiences.  ‘Galleries chose the locations and decided what they wanted to do, choosing their exhibition partners.  TENT’s programme brings together dealer galleries and artist-run initiatives and their agendas are differentiated from those of public galleries.  ‘As a dealer you are trying to move art out of the gallery and into people’s homes.’

The inaugural event will feature twenty-five galleries presenting live exhibitions and events at multiple locations throughout Aotearoa.   Pop-up exhibitions from all the participating galleries will be outside their usual premises and in different cities and towns and in online exhibitions:  www.TENT.art.  TENT will also see special events, suggested curated walks, chances to meet artists and more, taking place over three days.

SCAPE Public Art hosts Heather Straka’s Isolation Series opening at the Hotel Montreal in Ōtautahi.   It is an exhibition connected to the city’s culture and communities on a number of levels with a close association between the venue and the art.  Straka has photographed a series of portraits of in which her subjects are conscious of the city’s long-standing association and romance with Victorian and Gothic Revival art and architecture.   The contemporary reality of the figures is positioned somewhere between theatre, history and  the present day, and the ambiguities of identity and social issues of privilege and homelessness.

Wellington and Auckland-based,{Suite} is opening Wayne Youle@ TENT, an exhibition of new works by Waitaha-based Wayne Youle, as well as photographs from the estate of Ans Westra.  Youle was the subject of a major solo exhibition of new works, Look Mum No Hands, at the Christchurch Art Gallery in 2017. Wayne Youle@ TENT is also a solo show of new works, featuring large- scale paintings, a new sculpture and neon work. Youle’s refined minimal paintings border on pure abstraction yet remains unable to resist the conceptual temptation of a myriad of potential narratives.  {Suite}’s exhibition is at 65 Cambridge Terrace, the premises of  Athfield Architects’ Christchurch office and former home and offices for Warren and Mahoney designed by Sir Miles Warren.

Wellington’s artist-run space play_station makes a tangible and sincere connection to Ōtautahi and one of its most influential arts educators, W. A. Sutton (1917 – 2000).  Play_station takes up residence at the Sutton House in Richmond, a heritage house and garden, as well as a residence/studio for artists, overseen by the Christchurch Art Gallery Te Puna o Waiwhetū and the Ilam School of Fine Arts.   play_station’s presence also embodies an historical association between generations of artists.  In addition to artists Ming Ranginui, Lily McRae and Mady Cheng, two of the artists representing this artist-run initiative Bena Jackson and Max Fleury grew up in Ōtautahi and are conscious of the house and its post-quake status bordering on the red zone and the opportunity to reflect on the changing nature of the city and landscape.

Jackson concedes that they were ‘keen to head to Christchurch which is where we both grew up and where there has been a really exciting and active new scene of galleries/ARIs. [artist-run spaces].  We were interested in the Sutton House for its historical status and unusual placement within the residential red zone post-earthquake, ten years on a place in its own right inhabited by wild rabbits and trees for foraging, [and] the proximity to Fitzgerald Avenue and the city's boy-racer culture.’

Fox Jensen & Fox Jensen McCrory gallery is based in Auckland and Sydney, bringing representation of the work of Australasian and international artists to Ōtautahi.  Andrew Jensen maintains it is an exhibition programme that has evolved somewhat intuitively through his response to travelling overseas and meeting and working with other artist and galleries.  Jensen recalls that travelling overseas he came across work he was really attracted to, and when be brought that work back home, there was a local audience interested in that.  There were overlapping conversations despite being from different parts of the world.

In discussing the artists represented by both galleries in Ōtautahi Jensen rates Aida Tomescu as one of Australia’s most important painters, his work asserting a character that is deeply personal. ‘Tomescu is able to give us an experience of painting, of colour, of form, of material and gesture that doesn’t seek to mimic nature – it simply is its own nature.   Winston Roeth is less a painter of colour as he is a painter of sensation, the notion of sensation as a function of feeling and perception.  And yet colour remains the fundamental conduit to this awareness, albeit held within carefully defined compositions that concentrate his attention and ours.  Erin Lawlor’s painting practice rests on a foundation that is secured by the act of painting itself.  As fluid as these works appear they avoid the trappings of lyricism… a closer relationship to the world brings me back to the intimacy of Lawlor’s dissection of gesture. By placing us so near to this tumult, the painting arouses and heightens our sensitivity without recourse to sentiment.’

British artist Sean Henry’s sculpture belongs to a history of British art about the contemporary and figurative, (for example:  Paul Nash and Damian Hirst) creating large scale sculptures that displace perceptions of scale and our relationship to place.   Art historian Tom Flynn observes:  ‘Despite their observable realism, when viewed up close the works reveal a looseness of finish in the modelling and painting which announces the figure’s hand-made origin. He wants you to see where he’s been and how he’s made it. The result is an exciting, rugged, visually eventful texture which contributes significantly to our appreciation of the finished object.’