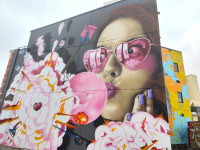 How do you gauge the success of a street art festival? This predicament arises in the wake of the inaugural Flare Street Art Festival, which wrapped in mid-March after two weeks of activity.  Many of the quantifiable metrics applied to other public events, such as ticket revenue and attendance figures, are harder to apply to a festival focussed on the performance of mural painting, a public act that has an eye on a longer legacy, drawing attention but not necessarily dense crowds.

Flare’s wider programme did allow for some measure of success under more traditional statistics, with a well-attended artist panel discussion (also live streamed on YouTube) and free guided walking tours proving popular.  Outside of numerical data, such activities bridged the gap between the audience and the artists, providing context and insights into the creative process and the experiences that have shaped the artists.

Of course, the art produced for the festival should also be considered in its appraisal. The seven murals formed the heart of the festival, their impact stretching beyond the schedule as new city landmarks. The range was a diverse mixture of styles and themes; from Koryu’s massive depiction of two fierce Niō statues standing as urban guardians, to Swiftmantis’ Olive, an intricately detailed black cat surveying the St Asaph Street carpark of Little High. Along Memory Lane, Gisborne artist Kell Sunshine’s bright, lyrical piece (a contrast to the architectural geometry of the nearby SALT mural) implores us to ‘Take a Walk on the Wild Side’, while Wongi Wilson’s work overlooking Manchester Street combines realism with explosive pop stylings.

On St Asaph Street, Kophie pays homage to the influence of hip hop whileprovidinga representation of the often-overlooked female presence in graffiti culture, while on Manchester Street, Ikarus reframes his journey through graffiti culture in a platform game. The final mural (delayed by the artist’s late arrival from Auckland), Elliot Francis Stewart’s striking illustration of a garden scene in blue and yellow, exudes a sense ofwarm nostalgia for simpler times. The success of the murals is evidence of the benefits of creative freedom, each artist revelling in the chance to work without imposed restrictions (not a native bird or heritage building in sight).

The sheer number of works produced for Flare should also be a mark of success, with over 40 new pieces by more than 30 artists emerging during the festival, providing a tangible transformation of the SALT District.  Flare not only brought visiting creatives to the city, but also presented opportunities for a large number of the local scene to work in visible locations. In addition to the headline murals, there was  Dcypher, Ghostcat and Dr Suits’ painting-slash-installation Make Art Not War, the ‘Wahine Takeover’ at the BOXed Quarter, the graffiti jamalong the laneway behind Smash Palace(the veil of mystery of graffiti temporarily lifted), and the series of productions on the newly erected fencing along Billens Lane. The spectrum of work produced across Flare was a summation of the diversity of urban painting, from traditional graffiti to elegant portraiture.

But perhaps the most telling measure of success was more anecdotal.  While watching a group of artists paint on the final weekend of the festival, I witnessed dozens of people hunting out the new murals, many people expressing their appreciation and how great it was for the city to be injected with creativity.  Such comments were not isolated, people echoing these sentiments throughout the festival as I wandered the walls. Ultimately, Flare’s success is found in the energy and excitement it generated as the city once more burned brightly as an urban art destination.