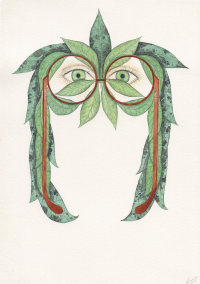 New Works by Zina Swanson the Inaugural Recipient of the Grace Butler Memorial Foundation Award at Ara opens at The Jonathan Smart Gallery.

Zina Swanson’s ceramics and works on paper are the subject of an installation-based exhibition at the Jonathan Smart Gallery, developed during her time as the recipient of the Grace Butler Memorial Foundation Award at Ara residency.   The new works take their cue from Peter Tompkins’ and Christopher Bird’s book, The Secret Life of Plants (1973).  Widely criticised by scientists, the publication speculates on the sentient life of plants, including the idea that human attention or inattention to their care may see them flourish or die.  Swanson’s acknowledges a qualified scepticism:  “I don’t believe it.  I just like those things.  They are kind of beautiful and a bit sad and weird.’   Reflecting on The Secret Life of Plants, she collected leaves from around Ara ‘s Art and Design campus, ‘thinking about some sort of device for focusing on one thing - and ignoring another.’  Zina Swanson’s exhibition opens at the Jonathan Smart Gallery after 20th May