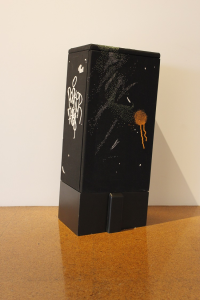 Jay Hutchinson, The archaeology of the discarded, forgotten and thrown away.

‘The archaeology of the discarded, forgotten and thrown away’ is a curated selection of works from three of Jay Hutchinson’s previous projects.

Neatly hung along the gallery wall are seven framed fast food packets and candy wrappers that complete a series titled ‘On the way to work 6/6/18 – 7/11/18.’ Ahead an abandoned pie wrapper clings to a rusted wire fence, next to two partially crushed cups. Surrounding ‘Two cups and a Jimmy’s mince and cheese pie wrapper’ are larger, out-of-place items from the projects ‘Turn left at the end of the drive’ and ‘Across from the court on the way to the mall.’ A “graffitied” signpost, corrugated iron, an electrical box and a tile; nothing is as it seems.

The initial projects were given names that act as coordinates to retrace the artist’s steps or to vainly explain what it is we are looking at. Hutchinson identifies himself as a flâneur: an urban explorer or observer. In focussing attention on the geography of these defaced or discarded items the three projects morph into one work and encourage consideration of the ideas of place and value.

The literal titles of the works build on the idea of trash. It’s plastic, it’s everywhere, you’ve seen it before and you’ll recognise it at a glance – ‘Burger King’, ‘KFC.’ In a throw-away world saturated with advertising, Hutchinson has created not only art in luxury fabrics, but mystery too.

The subject is chanced upon on the footpath and photographed “on the way to work” then digitally printed onto silk to retain its dirty, torn appearance. However, on closer inspection the stain is carefully applied and the embroidery is precisely used to enhance larger lettering and motifs, such as those on ‘Night & Day.’ Hutchinson cleverly distorts historical ideas about the place of embroidery in the art world, and in wider society.  Decorative arts have long been separated from fine arts in much the same way fast food is shunned, a prioritising of snobbery over accessibility.

The variety of fabrics and needlework Hutchinson uses to create his pieces would make any nineteenth-century governess proud, while the disparity between a paper pie packet and silk builds the illusion of something you’d rather not touch into something beautiful. The spontaneity of graffiti is contrasted with the time-consuming nature of embroidery and the unthinking, careless act of littering, against the analysis and attention to detail he enlists. Even the splatter of bird poo is delicately formed in thread.

Hutchinson has taken his experience as the urban observer on the streets of Dunedin into the gallery space, and in the process, placed the visitor in the enchanting role of flâneur - a role which, if embraced, offers great rewards.

IMAGE
1. Jay Hutchinson, The archaeology of the discarded, forgotten and thrown away, (installation image - detail), courtesy of the artist and Aigantighe Art Gallery

+ Text Size -
Do NOT follow this link or you will be banned from the site! Original generation time 2.3686 seconds.