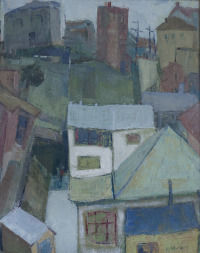 In August the Aigantighe Art Gallery in Timaru launched what I think might well be one of the most important exhibitions of the year.  It’s a small show, but well chosen, curated by the Aigantighe’s Hamish Pettengell.  It is both a surprise and delight.

The exhibition Group of Seven recreates a critically well-received 1966 exhibition that showed at the Dunedin Public Art Gallery, but the eponymous Group of Seven was very much a South Canterbury phenomenon.  Which is probably why most people haven’t heard of them, but they jolly well should. Hopefully this exhibition will go some way to correcting that.

Modelling themselves on the Christchurch Group, with whom they were closely associated, the Group of Seven consisted of Molly Stevens, Gypsy Poulston, Vivian Lynn, Ruth Millar, Pat Rowell and only surviving member, Morgan Jones, coalescing around the then relatively prominent artist Clifford Brunsden, meeting at Stevens’ house.

Conscious of their relative provincial distance, they were incredibly ambitious. It’s there in the name –“Group of Seven” – an announcement of solidarity, worldliness and modernist mandate. They showed with the Canterbury Society of Artists and the Otago Art Society.  Brunsden had travelled Britain and Europe, with direct experience of modernism, including apparently Picasso, and was the Aigantighe’s first director in 1956 until his death in 1969.

Individually the seven were often relatively well documented and of some art-historical significance. Often their works can be found in important public and private collections around the country. Stevens exhibited with the Christchurch Group and the New Zealand Academy of Fine Arts in Wellington.  Poulston, with her husband Eddie, won multiple National Bank Awards in the 1970s. Lynn was a prominent multimedia feminist artist with work in public collections around New Zealand.

Millar was a CSA stalwart. Rowell was the last to join the circle, working widely across art and craft – the mediator of the seven, and a little bit alternative. Her paintings are flamboyant and exuberant in palette and form.  Jones is represented in the show by a seductively tactile abstract wooden sculpture, but later became known for witty, monumental constructivist sculpture. He now lives at Arrow Junction near Queenstown.

Group of Seven is a reminder that art happens everywhere, even outside the main centres. Professional artists sought out each other for support and inspiration creating their own little bohemian enclave in Timaru.  They didn’t necessarily launch any artistic revolutions, but they were a community and their art is sophisticated, predominantly abstract, and utterly wonderful.