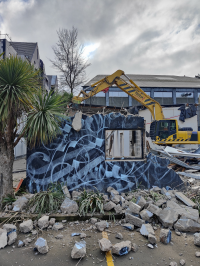 I have spoken about the impermanence of urban art in these pages previously, suggesting that ephemerality is a defining trait of both guerrilla graffiti and street art, and muralism, neither seeking the longevity and historical burden of other forms of public art. Urban art reflects the state of the world in which it exists, where change is constant and the direct relationship between the art and the built environment ensures there is no privileged pedestal or plinth providing security. The fate of the art is tied to the fate of the surface on which it is produced, whether it is renovation, demolition or obstruction. It is a golden rule of urban art, and it applies to artist and audience alike: don’t get too attached.

Yet, when I received a message a few weeks ago telling me the rear section of the YMCA building on Hereford Street was being demolished, my heart still sank. I knew of the impending action for a while, the YMCA was always heading towards a new build and with it; the art that adorned the building was on borrowed time.

Strongly connected to Ōtautahi’s urban art festivals, most notably the Spectrum shows (2014-2016) and Street Prints event of 2017, the YMCA’s exterior features a number of works by celebrated artists. While Fin Dac’s Kaitiaki overlooking Hereford Street might be most familiar, my personal favourites were found in the rear carpark. There was the giant pink toothbrush painted by Tauranga artist Eno during the Rise festival to mark his daughter’s birthday (he had mistakenly packed her toothbrush in his suitcase and was away for her big day) which had already been obscured, but also Sean Duffell’s alien-like orbs floating casually across the west-facing wall, strange invaders surveying the terrain, references to our natural world, from koru-shapes to earthy tones, adding elements of familiarity. One bent around a wall, one was obscured by a window frame, while another’s eyes creaked open as if awoken by the viewer’s presence. I remember calling past as the artist painted in between skating the carpark, the relaxed air evident in the work’s almost humble demeanour. It was a work that appeared as if it could have been an overnight intervention, reinforcing the invasion angle and making it closer to street art’s roots than larger murals.

Around the corner in glorious black and ever-so-blue-white, Aotearoa-born, Australia-based Mayonaize’s hypnotic mural captured my attention from day one. Produced for the Street Prints event in 2017, I had not observed the artist at work, but in its energy and line work, the physical exertion had always been clear. I loved showing off the calligraphic composition, suggesting references, but ultimately encouraging viewers to simply immerse themselves in the forms and explore the textural and gestural qualities. The tactile surface was hard to resist touching, as if trying to reach into the swirling vortex. I would regularly inspect the minutiae of brush marks and the lengthy, full-bodied sweeping strokes that had grown from the small wristy painted lines. The emanating circles emphasised the sense of growth and movement, and on the right day and at the right time, a blue-sky backdrop would illuminate the work, adding a sense of glowing liveliness.

So, as I watched the digger move around the rubble of the deconstructed building, small blocks scattered like jigsaw puzzles of the now fallen paintings, I was torn between disappointment and recognition of the inevitable.

Duffell and Mayonaize’s paintings were reminders that muralism does not have to employ conventional approaches to be effective, that abstraction can be striking, and size doesn’t always matter. But a message from Sean Duffell, responding to a photograph of the demolition site, reminded me that letting go is key and that artists are quick to move on. After jokingly asking to “Grab me a piece of rubble”, Duffell added: “Jokes, I don’t need a piece of my old crappiness!”