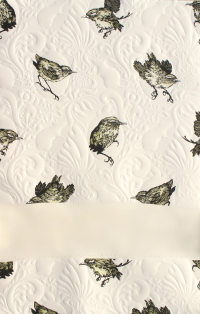 Printmaker Ben Reid’s current exhibition at Chambers Gallery, Birds of Paradise, in the first instance, is an affirmation of the relationships that humanity has with the natural world.  Indeed, Reid’s meticulous prints are capable of celebrating, even eulogising the beauty and complex nature of earth’s creatures, directing our attention to native wildlife as precious subjects.  Yet, in their widest context, the “big picture” of Reid’s practice is thematically, as freelance journalist and arts writer Malcolm Burgess observes, about ‘the unpicking of the heart of colonisation, exploitation, conservation and restoration.’    (It is not surprising that Burgess also makes the link between Reid’s practice and New Zealand artists  Rei Hamon and Bill Hammond).

Indeed, an introduction to Reid’s prints is also accompanied by uncomfortable questions and issues remaining to be discussed and resolved.  In Home among the birds, a print from Birds of Paradise, the detail of Reid’s subjects serves as an introduction to the small detail of the natural world and its creatures.  But why do the birds seem to position themselves at separate points from one another within  decorative wallpaper patterns, their placement shared and contrasting with the embossed Victorian designed background that also provides a home for rats, (look more closely at Reid’s patterns and motifs), subjects introduced in the early decades of colonisation in the 19th century.  Home among the birds like many of Reid’s prints is an object of beauty and critical political commentary and more than timely in the 2nd decade of the 21st century.