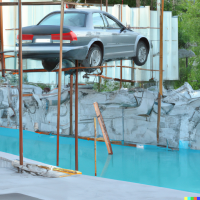 Among the many offerings from SCAPE 2022, one installation that stands out for me in terms of its intellectual intrigue and layers of accessibility, is Eddie Clemens Cognitive Reorientation.  A former Cantab, though long since based in Auckland, Clemens was inspired by the first series of the 2007-2012 Danish TV noir series Forbrydelsen (The Killing).   It’s always nice to see Clemens back in Christchurch.

A typical trope of such Scandi thrillers is the car, usually containing a victim, raised from some lake or cove. This provides the conceptual basis for Cognitive Reorientation. Clemens suspends a car over the urban pond, seagull habitat of the flooded, ruined basement of the long-gone Price Waterhouse Coopers building basement.

The car has been rigged to spew water like a fountain, giving the impression that it has just been lifted from the depths by a crane – a dramatic moment frozen in an enduring loop of time.  What could be more dramatic, or more immediately familiar. It is almost a cliché, but the act of artistic performance gives it new life.

Clemens invites us to consider the labour and visual trickery that goes on behind the scenes of a police procedural, and the careful psychological manipulations contrived by a collaboration of writers, designers, directors and actors. It also asks us to consider the clunky sausage factory,  required to churn out mass entertainment.

This work forms a continuity with other work by Clemens similarly exploring the machinery of movies. Other works of his oeuvre have involved recreated props and sets from Terminator 2, Blade Runner, and Nightmare on Elm Street, muddling reality and fiction.

One is immediately struck by the impossibility and artifice of the scene.  It is almost surreal but is merely a contrived special effect. The familiarity of the trope comes with so many emotional and atmospheric attachments.

Clemens seems to be interrogating the Baudrillardian territory of the simulacra and hyper-reality,  our increasing inability to distinguish authentic reality from the artifice manufactured for our entertainment.

That’s not to say Clemens doesn’t take his pop-cultural preferences seriously.  He is obviously a fan – and a bit of a geek - but he is also asking an important philosophical question about where fact ends, and fantasy begins.  What is the nature of experienced reality, of authenticity?

Is there some clue? Can we see the edge of the backdrop? Is the boom mic in shot? Or perhaps there is some digital artefact revealing CGI trickery? At what point does fiction become completely indistinguishable from reality? And does it really matter?