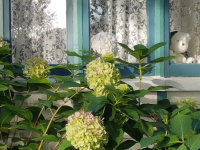 It’s not overly clear where the phenomenon of teddy bears in windows to cheer up people in their bubbles of pandemic self-isolation came from.   It was already popular overseas before the Facebook page “We're Not Scared - NZ Bear Hunt” appeared (it has around 8000 followers) and Prime Minister Jacinda Ardern declared her participation from her Wellington Parliamentary residence.

In many ways it’s a nationwide participation in a spontaneous global community artwork as hundreds of thousands, perhaps millions of people, intervene in their collective environment to deliver one single, clear, unified message of solidarity in a time of high anxiety, in an effort to distract and entertain children like a treasure hunt, while we are confined to our social bubbles.

Even without getting into Rosalind Krauss’ conception of the Expanded Field, where spatially-based visual art expands into spaces between sculpture, architecture and landscape, or Nicolas Bourriaud’s idea of Relational Aesthetics where art takes its cue from social context rather than private space, it’s fair to say contemporary western art is predicated on three principles defined by three great artists and provocateurs of the twentieth century.  Marcel Duchamp’s readymades showed that it was intent and environment that defined art, and in fact anything could be art.  Joseph Beuys pushed for a democratic view of art making where anyone who felt the urge to create could be an artist.  Finally, is Andy Warhol, who conceived of Pop Art as art of the familiar for everybody.

This triumvirate sat at odds with a modernism exemplified by über-critic Clement Greenberg where only a clinical form of abstraction would do, and any sign of figuration or sentiment was to be condemned as kitsch and ultimately ideologically aligned with the propaganda of fascism and communism.  Increasingly though, there has been a return of a romantic sensibility that embraces sentiment and sentimentality as legitimate and human existential responses to an overwhelming, infinite and arbitrary universe.  COVID-19 certainly fits the bill in deserving such a response, and if anything can be art, anyone can be an artist, and art can be for everybody, then why shouldn’t we regard these furry little interlopers in our windows as an artistic act?

Of course, that is probably over-thinking it, although as a mass action it undeniably fits the bill as an artwork.  These bears ultimately find their origin in a 1902 political cartoon in the Washington Post depicting President Theodore “Teddy” Roosevelt refusing to shoot a stunned and tied-up black bear for a trophy on the ground of being unsportsmanlike. To us they represent comfort and security, especially for children. To put them in windows at this difficult time is a profound act of kindness, humanity and community, a material sign of our existence and participation at a time in history where life is increasingly led in isolation and mediated by screens and technology.

Ours is a culture of display, with a distant echo of Walter Benjamin’s Arcades Project (1927-1940) and the idea of creating a stimulating environment for the flâneur even in the restricted form of the neighbourhood and the household bubble.

As an event, this is possibly the first example of spontaneous art performance produced in response to the COVID-19 pandemic, and a truly heart-warming moment in this otherwise dark and worrisome time.

In the windows of home in Ōtautahi and Aotearoa