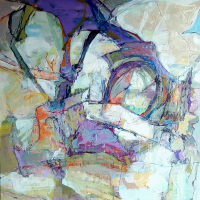 Akaroa’s Orion Powerhouse Art Gallery is presenting an exhibition of new works from Christchurch-based artists Simon Edwards and Ross Gray.   From 2004 till 2016 Simon and Ross were close studio space neighbours in a number of the city’s buildings sharing the lease of their artists’ studios.  Yet SPACEMATES is the first time they have exhibited as a duo, a party of two with their own group show.

Simon Edwards exhibits a new series of works that he describes as taking traditional ideas of landscape, the sublime and the beautiful and how these traditions have influenced our contemporary view of nature.  ‘The imagery is drawn from many locations in the Southern Alps, ranging from Kaikoura down to Milford Sound and the work is not a literal description of a specific place, rather, anything specific in the work acts as a reference point to suggest a space, a distance or a memory.’

Ross Gray held two solo shows at Chambers,  Paintbox in 2017 and Boxing On in 2019 and he describes SPACE MATES  as an exhibition that builds from there,  working along an orbital theme, with ‘bony-eye sockets’ taking in circular movements in space.’ Some small gestural aquarelle works extend into a series of paintings which explore formal and technical aspects while referencing heritage and memory in a world-in-a-spin context.’