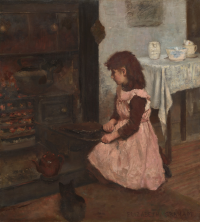 Leaving for Work is the Christchurch Art Gallery’s most recent historical exhibition and its title comes from Le Départ Pour le Travail [Leaving for Work], Jean-François Millet’s famous etching of two peasant labourers from 1863. The exhibition draws together European and New Zealand paintings and prints from the nineteenth century and first half of the twentieth century. Throughout, men and women have been captured performing tasks within their chosen profession, and the major industries and occupations represented include agriculture, factory work, nursing, domestic service, and retail.

Millet’s Leaving for Work is included in the first part of the exhibition and alongside it are other images of rural labour including Petrus van der Velden’s Gathering Beet, Village of Rijnsburg(c.1888) and Juliet Peter’s Sheep Sale (1944). As well as her art training, Peter had nursing and farming experience and volunteered for the Women’s Land Army during WWII.  Factory work permeates William Hogarth’s engraving Industry and Idleness, The Fellow ’Prentices at their Looms (Plate 1) (1747)and L.S. Lowry’s Factory at Widnes (1956).

A highlight of Leaving for Work is the digital presentation of photographs by Christchurch photographer, Steffano Webb.  The photographs belong to the Alexander Turnbull Library and are projected on a wall, one at a time. They capture Christchurch people at work during the first decades of the twentieth century and personal favourites include the ladies’ painting class at the Canterbury College School of Art from 1907 and photographs of local nurses from 1913 – 1914. Webb’s images of nurses tie in beautifully with Nona Hildyard (1918), a portrait by Richard Wallwork. Hildyard, a local nurse, was part of the New Zealand Army Nursing Service. She was killed in 1915 in the Aegean Sea after her ship, the Marquette, was torpedoed by a German submarine. The inclusion of the nursing profession in this exhibition feels incredibly timely.

A surprise of the exhibition is Elizabeth Graham (c.1885), a charming late nineteenth-century painting of cosy domesticity: a young girl is perched at the fireplace, preparing the bellows for tea, while a little black cat keeps her company. It is attributed to Frank Bramley and was gifted to the Gallery in 2020. An emphasis has also been placed on mid-century women printmakers: Eileen Mayo’s linocut of a travelling milkman in horse and cart in Doric Dairy (1935) and Juliet Peter’s lithograph Circus, Night (c.1955) are remarkable. A small yet enriching exhibition, Leaving for Work explores the various aspects of working life and the dignity of honest labour.