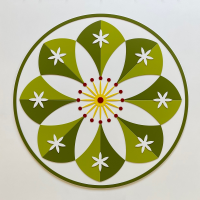 For more than twenty years the work of artist Tim Main has revealed his response to the principles of the Arts and Crafts Movement and the influence of its founder William Morris (1834 – 1896), creating contemporary works that celebrate the mystery and orderliness of the natural world.

There is a sense of Main transitioning from his previous circular rosette works of native plants as evidence of the timelessness of life to a new series of works that extend and resolve his ideas to some extent.  Here to Eternity is an exhibition that works from the small detail of the land creating images of native plants; Clematis (Puawananga in te reo), the Rata Star, and Mount Cook Lily.

Where did the interest in these flowers come from?  Main says that he had been looking at the history of barn stars in Europe and, in particular, Pennsylvania Dutch in the United States.  The Pennsylvania examples are among the most celebrated in the world.  ‘The descendents of this Dutch community blest their barns with symbols that can be religious but they can also be cultural and of local flora and they make this connection which you find through various cultures  representing flowers as stars.  Flower and stars represent both the small and the vast. It can be seen as religious also as not being religious.’

As an expression of folk art they are also symbolic of their understanding of nature of their world and existence.  Main comments, ‘the flowers are local and really about a state of being and a relationship between land and people.  My ‘celestials’ were along the same lines and they are also about micro to macro- the small also representing the very large.   I took the Clematis, the first flower of spring in New Zealand.  It is a native plant that flowers and grows from trees.  In Māori it is called Puawananga, and in the Māori oral tradition, Puawanaga is the child of a star and its parent, in English is Rigel, the top star in Orion and it rises in June.’

‘Many cultures take flowers and put them up with their stars.  It is an idea that is across many cultures and it is pre-Christian.  A European idea that is still found in the United States and also an idea about a relation between the earth and the cosmos that the German Catholic theologian and philosopher, Franz Anton Staudenmaier (1800 – 1856) described as a shared and reciprocal relationship:  ‘All flowers – those luminous stars sown in the grass – are, like the stars above them, letters for the great name of the Eternal, which mortals cannot utter nor pronounce.  Each manifests to thee His omnipotence, wisdom, goodness and love; each is a gentle revelation of the Deity.’