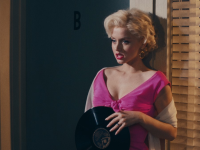 Wellington-born Australian-raised director Andrew Dominik volunteered violent coruscations of his take-no-shit personality during interviews for his new film.  “Blonde is a demanding movie.  If the audience doesn’t like it, that’s the fucking audience’s problem.  It’s not running for office.”

The controversial film presents a traumatic split that everybody should be able to relate to: a public self that we embroider and parade to the world, and an unloved self that exists only in seclusion.  It’s no accident that Blonde shares much in common with the cinema of David Lynch, the quintessential contemporary architect of the ‘woman in trouble’ film (Twin Peaks: Fire Walk With Me, Mulholland Drive, etc). Dominik gushes: “I think that (David Lynch) is the greatest living director. I think (he) is working at the very epicentre of what movies are because he harnesses the way we’re injured. It’s like he can plug directly into all (the) trauma that we feel and bring it out through a movie.”

If any piece of music could so perfectly signal compassion it is the Lynchian/Badalamentiesque ‘Pearly’ from Nick Cave & Warren Ellis’s Blonde score, a glisteningly poignant stretch of sound that has reduced me to tears innumerable times during my weekly peregrinations by bus into the nauseous fulcrum of Christchurch city.

You can tell by now that I hold the disesteemed belief that Blonde is a sumptuous and crucial film, a feminist text, in fact, that adheres closely to what Dominik refers to as the “bible” of Joyce Carol Oates’ original 738 page novel.  During its initial 2000 publication, Oates’ book also received the scathing, spit-at-your-screen passion that the film has recently encountered, largely due to its hypnagogic marriage of history and fantasy.  Writer/director Paul Schrader wrote, ‘There is one thing wrong about this film.  Dominik's kaleidoscopic approach (…) creates an indelible character study. But it's not (about) Marilyn Monroe.  (Blonde) would have been far better if freed from Marilyn Monroe's history.  Critics say Dominik did Marilyn no favors. I think it's the other way around. Marilyn Monroe did him no favors.’

See:  Joyce Carol Oates, Blonde, a biographical fiction on the life of Marilyn Munroe, published in 2000, and finalist for the Pultizer Prize in 2001