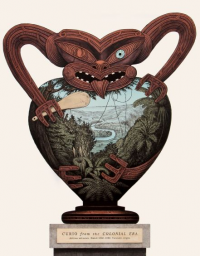 The Wrightmann Collection: An All-Encompassing Perspective ofArt in a Post-Quake City

It is a private art collection of nearly 1,000 works that began its life as the two separate collections of Selene Manning and Anthony Wright.  Housed in their two-story home designed by Athfield Architects, The Wrightmann Collection will open for a one-evening fundraising event, 19th November, for SCAPE Public Art.

The Wrightmann Collection maps a recent history of the visual arts in Ōtautahi Christchurch that is exceptional.   From 2007, Manning and Wright have added to their earlier collections of botanical art and contemporary works by prominent artists from Aotearoa with the addition of literally hundreds of works by local emerging artist acquired after February 2011.  Wright maintains, ‘the earthquake changed everything.’

They visited and purchased works from new and existing galleries and pop-up exhibitions, visiting spaces that included ABC Gallery, Artbox, Dog Park, North Projects, Outer Spaces, Room Four and The Auricle, with Ilam Campus Gallery also a priority. ‘We were going out to almost all of their exhibitions, so we got to know the students really well over a period of four to five years.  They became friends.  In the eight or nine years after the earthquake, up until when our house was built we more than doubled the number of works in our collection.’

Manning observes that they both made ‘a very conscious decision after the earthquakes; do we stop collecting and wait until we have bought or built a house and settled with insurers?   Or do we carry on supporting artists and adding to the collection?  We decided that we would keep buying.’

‘Aside from the fact that quite a few of the early artists we collected are established now, the scattering of really established works through the collection allows a bigger conversation between all the works.  Emerging artists are taught by, influenced by, mentored by, and in conversations with established artists all the time.  What impresses me  is how easily the work of an art student - or a self-taught artist for that matter - can sit and hold its own energy and voiceamongst the works of more established artists.’

Wright also maintains that they  would never buy a work simply to support an artist. ‘It is about loving the work.  It’s that instant resonance thing; and theartists that we are really passionate about we have followed and followed.  You pick up some and stay with them.’

And there are many works in their collection that they discovered on first encounter were impossible to say no to.  Chris Heaphy’s Poroiti, 2012 is one of those for Wright.  ‘It was an instant hit. I got butterflies when I saw it at Jonathan Smart Gallery,’ [which in 2012 was at Neil Dawson’s studio at 183 England Street in Linwood.]

Printmaker, Marian Maguire’s three series of lithographs from 2005 to 2011 that raisedquestions about the ancient Greeks and European colonisation of the Pacific are also a favourite. An important suite of works, Wright describes as deserving of a place in any public gallery’s collection.

In many instances the artists have reciprocated their support for Manning and Wright.   ‘Some artists have been incredibly generous to us, gifting works and little things that are “thank-yous” - even thank you cards. My first of the latter was Joanna Braithwaite sending me a card that had the most gorgeous painted eye,which is now framed.’

Manning says that it was a very conscious decision to support local artists.  ‘There wasn’t a lot of money around post-quake so people weren’t really stepping up and spending.  They were trying to settle with insurers.  We were worried that local artists were going to move to Wellington or Auckland.  We were really keen to be part of the community that encouraged them to stay.’

How do they decide on a particular work for their collection?  There is an instant curiosity says Manning.  ‘It is an engaging desire, an emotional connection and it is very strong.  It is the difference between just being happy to view it and needing to live with it.  There is a tipping point where you want to own it and you want to see how it was painted or drawn and you want to dive into it.’

Wright says that for him it is a ‘combination of the hair standing up on the back of your neck as though you are in the presence of something almost life changing. It creates an instant ache that tells you - you can’t live without it.’

‘Elizabeth Moyle’s latest oil painting, Memories Surface, which we purchased from Chambers Gallery is exactly like that.  Wow, this is Lizzie now.  This is so different to our previous works of hers, and then you start to try and unravel why.  She uses plywood in a way like Sam Harrison does to amplify what they are doing.  What they are saying?  What they are painting and why are they printmaking?

Manning says that humour is important as well - along with the pushing of people’s comfort zones.  ‘Art has such a large role to play in society.  It is not only ‘pretty’ or ‘comfortable’ or ‘easy to access; art also needs to reflect human complexity, playfulness and rebelliousness (be it political, moral / ethical or societal). This invariably introduces humour into an artist’s work, something we both enjoy and love to be surprised by.’

To a certain extent, this accounts for the substantial representation of Francis van Hout’s paintings in their collection, dating from The Pink Terraces, 2013 toConjunction Moon in 2020.  Wright and Manning are keen to spread the word,not only about van Hout, but all the artists whose work they have collected.  ‘If you like something by an artist, no matter what anybody else thinks - do not be afraid to buy it.  We tell people that Francis’ work is fantastic.  When you love art you want to support artists.’