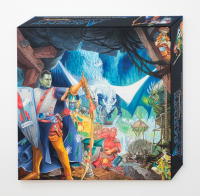 Simon Denny is New Zealand’s best-known artist in a field of contemporary postmodern art usually called post-capitalist or post-internet which just means that through installation and relational aesthetics it attempts to describe the social and political peculiarity of our media and technology saturated lives.

In 2013 Denny made the extraordinary installation The Personal Effects of Kim Dotcom, creating hyperreal simulacra of property taken from Dotcom’s during the infamous police raid, as recorded in official documents. This worked quite well until Dotcom himself shambled from the shadows with his “Moment of Truth”, bringing a distracting note of human pathos. Then in 2015 Denny represented NZ at the Venice Biennale with Secret Power, exploring our place in the Five Eyes intelligence gathering alliance through the trope of the US NSA’s graphic design culture.

At that point it was impossible to tell whether Denny was playing critic or fanboy – like Bryan Ferry’s falsetto, you couldn’t tell if it was sincere or ironic. With The Founder’s Paradox, there feels to be more of a moral position perhaps inspired by the surprising revelation that tech mogul and libertarian cipher Peter Thiel had purchased NZ citizenship without ever having been resident. This tied in will all sorts of dystopian weirdness from Queenstown bunkers to life-extending blood transfusions which Denny developed into board games. Denny counterpoints this with other board games based on the collective, left wing vision in Max Harris’ 2017 book The New Zealand Project.

Fitting within a tradition that paradoxically also includes Michael Parekowhai and et al., The Founder’s Paradox is a dense, layered experience that isn’t going to reward a ten minute breeze through, but if you’re a politics wonk like me, it’s well worth the effort.

+ Text Size -
Do NOT follow this link or you will be banned from the site! Original generation time 1.8283 seconds.