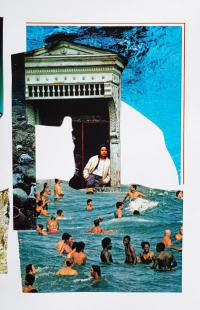 Like many compulsive diarists, prolific South Island artist and musician Spencer Hall has a deep sense of self.  A lifelong journal keeper, Hall has culled these bite-sized articles, comics, photographs and illustrations from his 2018 and 2019 sketchbooks, charting his move to Canada and his recollections of life in Aotearoa.   Slickly printed in Montreal with a striking colour cover, Scraps is a lovingly assembled letter to the world, featuring typewritten lists of favourite records, t-shirt graphics and zines, memories of minimum-wage jobs, spidery sketches of half-remembered photos from a broken smartphone, an adorable tribute to his Canadian partner and a heartfelt autobiographical strip about the Christchurch mosque tragedy.  As a dedicated self-publisher, collector and curator, Hall constantly examines his identity as a New Zealander flying the flag for idiosyncratic media, and his expatriate status has sharpened his focus, giving his memories of home a wistful tinge - A delightfully framed window into the mind of a dearly-missed local creator.

“It’s my mother’s presence - I can hear her laughter in the flushing toilet.”

Brett’s worldview is goofy, charming, and refreshingly well-adjusted (notwithstanding the short dream strip in which a wood louse is surgically removed from a young woman’s head) and sidesteps the darker, confessional nature of many personal comics. Confident, articulate and whimsical, Lucid Change is a fine collection of underground strips from a talented newcomer.

“The throat singing’s begun. Through the amp and loop pedal. Shoot me now.”