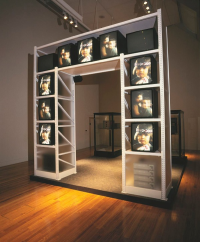 I spend some time at the entrance to Māori Moving Image: An Open Archive, captivated by the interplay between groups and individuals, tamariki and pakeke, stillness and movement, and tūpuna and mokopuna, all encapsulated in Lisa Reihana’s (Ngā Puhi, Ngāti Hine, Ngāi Tu) Native Portraits n.19897.

The work is a fitting waharoa to the archive brought together by artist/curator Bridget Reweti (Ngāi Te Rangi, Ngāti Ruanui) and Melanie Oliver of the Dowse Art Museum.  Reihana’s work powerfully and playfully foregrounds the weaving of the past and present that occurs throughout Māori Moving Image, and introduces a captivating kōrero between works.

The conversation between Rachel Rakena’s (Ngāi Tahu, Ngāpuhi) as an individual and not on behalf of Ngāi Tahu (2001) and Wānanga Pōha (2001) is particularly compelling.  The former is shown via a large-scale screen whereby a tama and kōtiro swim in a pool; enlarged excerpts from emails infiltrating the imagery and rectangular pool tiles resemble a spreadsheet cells, prompting consideration of the ways in which digital communication and information relates to definitions of identity.   In contrast, Wānanga Pōha, is an invitation to be a part of an intimate gathering, where kōrero, laughter, kai, and learning the skills of tūpuna, demonstrate the beauty of collective storytelling and notions of identity evident within that too.

The vast array of narrative forms within Te Ao Māori is evident in  numerous works in Māori Moving Image. . Paopao ki tua o rangi (2009) by Ngahina Hohaia (Ngāti Moeahu, Ngāti Haupoto) is an affecting multi-media installation which draws upon the art of poi, waiata, and photography, to represent the events and legacies of Parihaka.  Lightplay accentuates different facets of the work: the photos projected into its centre, the poi made from reconstituted wollen blankets and the embroidered raukura upon them, as well as the powerful soundtrack reminiscent of a pounding heartbeat, created by the artist’s late father, Te Miringa Hohaia.  Having recently learned of the atrocities remembered in waiata poi composed by survivors of Parihaka, viewingPaopao ki tua o rangi was a particularly poignant experience.

I was also drawn to the 7558 Collective’s Karanga (2017); featuring dual projections on opposite walls, the work invites the viewer to be immersed in an array of vivid imagery and the voices of wāhine.  It is a vibrant call to celebrate the role of women as “instigators of change” which prompted me to reflect upon the strong presence of wāhine artists within the exhibition as a whole.

The works and installations I discuss are but a small sample of Māori Moving Image.  This is an archive that calls for multiple visits in order to fully appreciate this well overdue and extensive survey of contemporary Māori art.