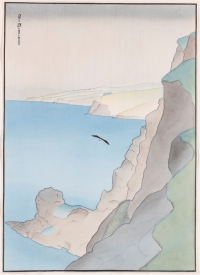 The Ravenscar House Museum in Rolleston Avenue opens in Ōtautahi Christchurch in early November.  The vision of entrepreneurs and art collectors, Jim and Susan Wakefield, Ravenscar is now the permanent home for their private collection of New Zealand art, objects and classical antiquities, transferred to the charitable Ravenscar Trust in 1999.  Ravenscar House itself will be administered by the Canterbury Museum on land gifted by the Christchurch City Council.

Acknowledging Jim and Susan’s close associations with Christchurch, Jim’s son, Steve Wakefield says that the Ravenscar Collection began in Remuera.   ‘They lived in Auckland and Jim was the owner/manager of the Avis Car Leasing company and they initially purchased a few works to rejuvenate their home.  Susan [then Susan Lojkine] had her own business in tax consulting in Auckland, working with Rob McLeod. They had a specialist tax firm, McLeod Lojkine Associates, and Susan later became chair of the Commerce Commission.  Jim built up Avis Car Leasing in New Zealand and Australia and when they sold the business to ANZ bank in the early 1990s they received a payment and that is the background to their art collection.

At the time they sold the car leasing business they moved to Christchurch and bought the land and location in Scarborough.  They enjoyed the design element and the landmark of an architectural home and they loved Frank Lloyd Wright.  They visited the United States and incorporated some aspects of his work into their home and that became their personal art gallery.     They didn’t just buy a work of art because it was historically significant.  They bought what they liked across a broad range of artists’ works and the collection became representative of New Zealand art from the past 100 years.’

The Wakefields’ long-term plan was to gift their Scarborough home to the city in which to display the Ravenscar Collection.  When their home had to be demolished after the earthquake they decided to fund the construction of a new Ravenscar House in the city.  This led to the decision in 2016 to employ journalist and writer Sally Blundell to research and write a publication documenting and discussing the collection.   In the forthcoming book Ravenscar House: A Biography (Canterbury University Press), Blundell makes a connection between the international example of prominent art collectors and the Wakefields’ ambitions. ‘The book tells their story and that of the house on the hill. The collection is indicative of other private collections, such as Kettle’s Yard in Cambridge.’

Blundell also highlights the relationship that Jim and Susan cultivated personally with the works they collected.  One of their first acquisitions was Frances Hodgkin’s Venice. ‘They travelled a lot internationally and really enjoyed Hodgkins’ painting of Venice.  Susan was a successful business woman and she admired other successful women and she saw Hodgkins as a pioneer in art.  TheRavenscar Collection has ten works by Hodgkin, more than any other artist. This reflects the Wakefields’ personal taste and the research that drove their collection. It is one of its strongest elements.’

Susan’s younger daughter and advisor in the care of the collection to the Ravenscar Trust, Frances Lojkine remembers the Hodgkins paintings and their presence in the family’s Scarborough home.  ‘Hodgkins’ The Farmer’s Daughter was up the stairs towards the formal living room on the left and as you turned to go into it, there was The Farmer’s Daughter’ – it really hit you between the eyes!’

Blundell describes the collection as an eclectic mix of paintings, sculpture and antiquities, spanning the nineteenth century  to the present day, evidence of the rigour of the Wakefields’ research, and emphasising that with all purchases their strongest criteria for an acquisition was that they both had to like the work.  Among its highlights, Blundell identifies colonial artists, Charles Goldie and Wilhelm Dittmer.

The Wakefields’ collection is further distinguished by its representation of mid-twentieth century New Zealand artists, Blundell drawing attention to its grouping of paintings by Evelyn Page, Lois White, Rita Angus, and a work by Louise Henderson.