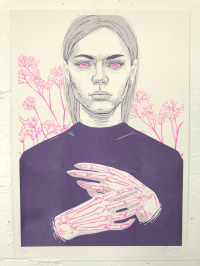 Multidisciplinary artist and designer Jessie Rawcliffe is holding her second solo exhibition at Absolution.  Previously exhibiting figurative paintings with attitude, the works in B-Sides - A Risograph Series, are no less promising.

Her new works take advantage of the perceived limitations of Risograph printing, a process often described as a photocopier meets screen-printer, producing a ‘master,’ or stencil, which the ink is pushed through.  Rawcliffe says that it is cost-effective and has become popular for ‘small scale publications, zine makers and artists.’

For Radcliffe, it offers some relief from her obsessively detailed brushwork, ‘challenging me to work more simplistically while considering the best ways to showcase a Risograph’s semi-transparent and vibrant inks.  B-Sides is a continuation of my exploration into the roles of the viewer and subject of portraiture, focussing on my interest in the macabre and memento mori .’ [objects representative of death].
‘The figures  in my work are referenced from friends, people online who’ve given me permission to produce a likeness of them, or myself; however my aim isn’t to create a good portrait of the subject in question, but to capture a moment, mood, or feeling.’