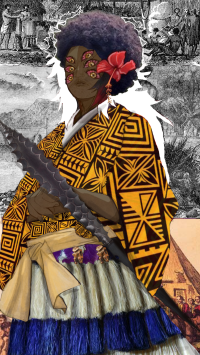 Jeffery Kalauta (J.3PK) is an Ōtautahi-based Pasifika musician, digital artist and emerging music producer, opening his exhibition Haia! A sea of Islands in December at Fibre Gallery, introducing A’A as a principle fundamental to Pasifika:

‘A’A, the non-binary tupuna, the transnational matua. A’A disputes the presumed superiority of western thinking, which confines the Pacific to dependent, isolated islands within the Pacific Ocean. A’A is not confined by the colonial term; Pacific Island; but looks past and adopts the description Moana, an expansive world with endless resources of interrelated islands and peoples. As Pasifika, we see our surrounding world holistically, which includes not just the land but the Moana, the heavens, the stars, and the underworld. We know this from the rich and diverse cultural stories of our heroes with significant powers from ancient times that continue to be told through generations.’

‘The current depiction shows A’A appearing in full splendor appearing and disappearing across time past and present.  A’A warns of respecting cultural knowledge.   In the face of more powerful and dominant belief systems, we should not diminish the extent and significance of Pacific cultural knowledge, which is vast, reaching out both physically and digitally across the Moana.’

‘The ability to tell stories that extend our cultural knowledge into new areas fundamentally secures the next generation’s voice.  A’A represents the cultural veneration that binds us together.   Heritage is everything.   It is bestowed on us by ancestors. It is endowed upon us by nature. A’A reminds us not to be confined by the definitions of others but to see through the actions of our people, through our own eyes how vast the Moana is.’

‘We are not small, poor, and isolated. As we wake up to ancient truth and reject the tiny spaces, A’A invites us to embrace the expansive cultural, political and economic richness as people of the Moana.’