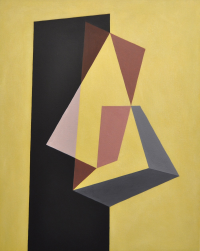 With this pulchritudinous show we find Francis van Hout unwisely(!) “havIng a dig” at art critics. Disillusioned Thinker presents digitally composed, yet hand constructed oil paintings of geometric abstraction, which seem to be the befuddling, yet perversely appealing products of an insomniac session spent ruminating and sweating lacerating bullets.

The exhibition features six portrait and three landscape format paintings, and this preference for the figurative is evident in the fact that the works are painterly re-workings of photographic self-portraits produced during the artist’s formative years. Taking an autobiographical cue from brother, Ronnie van Hout, this exhibition seems to beg the question: what constitutes a human face?  In one of the show's many cacophonous conglomerations we find a hangman composition, titled Disillusioned Thinker, which features a deviously dangling facial figure that could almost be read as the bastard child of Rodin’s The Thinker.

The sarcastically repetitious titles catalogue an imagined faculty of philosophical dropouts and the works’ odd assemblages play a juicy game of diabolical Jenga in the mind of the unsuspecting viewer. In works which perhaps intentionally feature imperfect lines and messy frame edges, we find monochromatic “L” forms awkwardly bundled together; a kind of one-dimensional alphabet soup. Lopsided clusters anxiously compete for a vantage point, from which we are endowed with the reluctant birth of square forms, unwittingly pushed together.

A sophisticated, minimal palette, reminiscent of one found in Tony de Lautour’s later abstract paintings, gives the illusion of tonal depth, though less so than in similar work from previous shows. Critical Thinker is an ambivalent highlight with its pea soup hue ripped from The Exorcist’s vomitous climax. Van Hout seems to be acutely aware that the use of the colour black will always reign victorious in the persisting tournament of stealing the onlooker’s attention.  We also find complexions such as blue yonder, rufous, muted asparagus, seared flesh, arylide yellow and defiled peach populating the flummoxed souls of the works.

The artist claims the influence of painters such as Matisse, Picasso, Gordon Walters and those of the Russian Constructivist movement, with the works’ compositions and titles appearing to fervently play with art historical metaphors like a maniacal, dancing cat, toying with its pitiful, maimed mouse. Although van Hout has a penchant for creating hard, often austere works, he is somewhat of a visual chameleon, and Disillusioned Thinker finds his practice reaching a campy, stylised vertex.