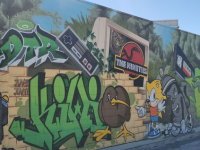 As the year slowly turns towards summer, Christchurch has seen a flurry of activity, with fresh murals appearing alongside smaller urban art interventions.  Predictably, Dcypher, Wongi ‘Freak’ Wilson, Ikarus and Jacob Yikes of the DTR crew have been at the forefront.  Christchurch’s most respected crew, DTR’s impressive collaborations and productions include the seaside-themed wall in New Brighton and the stunning 2019 tribute to DTR crewmate Jungle alongside the Moorhouse Avenue train tracks.

Within the last few months, the DTR artists have repainted the giant spray cans on Lichfield Street, while Dcypher and Jacob Yikes have produced two Antarctic-themed works, including the massive mural on Cathedral Square’s Novotel Hotel. Perhaps the largest mural in the city, it depicts giant penguins swimming through icy water, while small details, like tiny krill or a distant camp, provide surprising contrasts to the overwhelming scale.  While the Novotel mural is perhaps the more visible example, it was a slightly smaller, slightly more secluded DTR production that has struck a more personally resonant chord.

In The Greenway Te Ara Pū Hā corridor in the city’s Southern Frame, a densely populated collection of images creates a literal memory lane, immediately engaging those who, like me, tend to view life through a pop culture lens.  While the mural is a decades-spanning journey through cultural and technological references, it is also a tale of graffiti art’s emergence as a global phenomenon.

Commissioned by Ōtakaro Limited and produced with George Shaw from Oi YOU! Street Art, the production begins with an iconic New York subway car, splashed with graffiti surrounded by Vaughan Bodé characters (the underground comic artist a massive influence on subway graffiti artists), and a hint of one of Dondi’s legendary Children of the Grave series.  Above the carriage, an iconic Star Wars text scrawl reads: “In New York far far away over the decades a movement started that has changed the way the world looks”, suggesting the progressing graffiti narrative.

From there, the references flow thick and fast: Orko of Masters of the Universe, Back to the Future, a VHS tape, a Bart Simpson-Sonic the Hedgehog hybrid, Jurassic Park, a shiny compact disc, the Y2K bug, the ‘One Ring’, Adventure Time and The Avengers all make appearances. Alongside this cacophony of images, graffiti maintains a constant, evolving presence: a Seen bubble throw-up, a tribute to Jungle in the form of a smart phone photo, and notably a procession of spray cans echoing human evolution, the first hunched and clutching a Pilot marker pen, the last apparently a ‘street artist’ with hipster beard and glasses and a paint brush suggesting artistic expansion.  Similarly, a sense of Aotearoa graffiti’s growth is offered in a recurring kiwi character gaining in confidence and eventually embracing the globe.

Why do I find this so satisfying?  Not only does it riff on my nostalgic tendencies with a raft of references, it also represents artists presented with more freedom.  The work teems with fun energy, a reflection of the artists’ connection with the concept.  Often artists are faced with concessions in commissions, meaning that even exciting projects may present a sense of disconnect. But the Greenway mural is clearly one that allowed the DTR crew to play with things they love: graffiti, friends and the pop culture icons that have coloured their lives, and that affection proves infectious.

A portion of the new DTR crew mural in the city's South Frame, draws on nineties pop culture references.