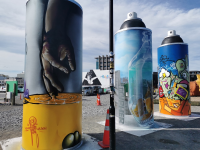 One day they stood there, sentinel-like pillars, thickly layered with paint like a silent yelling match. A few days later, they were gone, a reminder that, in Ōtautahi especially, things don’t last forever.

Over November, the youth space at Placemaking at One Central, located on the corner of Manchester Street and Lichfield Street was closed in preparation for the site’s next phase.  As part of the larger award-winning activation of the Eastern Frame (the project won the 2021 Large Scale Place Project prize from Place Leaders Asia Pacific), developed and delivered by Gap Filler in partnership with Fletcher Living, the youth space was always a temporary initiative.  But when the giant spray cans, the basketball court (which seemed always in use), the bulky climbing rocks, the table tennis table and the portable office building were obscured by hurricane fencing, the reality that the youth space’s end was near - hit home.

Of course, it is probably little surprise that of all the initiatives onsite, I will miss the giant spray cans the most. Initially designed for Oi YOU!’s Spectrum festivals and installed as part of the exhibitions inside the YMCA, the cans were wrapped with re-imagined spray can labels in 2014 and then stripped and painted by guest artists, including Jorge Rodriguez-Gerada, Seth Globe painter and Vexta, when the festival returned in 2015. When the Spectrum festivals came to an end, the cans were gifted to Fletchers and re-purposed for outdoor use. When the eight massive cylinders eventually became an eye-catching feature of the youth space in the middle of the city they retained these associations but also received a new lease of life as they took on new uses, surroundings, and contexts.

Once installed, Gap Filler and the DTR crew facilitated activations of the cans.  North of the basketball court, a row of three cans served as ‘permanent’ painting sites, where established artists refreshed the cylindrical canvases with the likes of Wongi ‘Freak’ Wilson, Ikarus, Dcypher, Jacob Yikes and Fluro producing eye-popping wrap-around designs, from typographical work to trompe l’oeil head-scratchers that played off the surrounding environment.  The five remaining cans, located behind the office building on the Eastern side of the site, were nominated as a more participatory project.  Serving as something of a legal wall space, the steel surfaces freely available for anyone with a pen or paint or paste to leave an addition.   The results ran the full gamut, from detailed creations to small scrawls, the cans thickly layered with paint and constantly changing from day to day.

In addition, the cans were utilized for graffiti art workshops, they became a popular stop for tour groups and school classes (many leaving their marks behind as proof of their exploration of the city), and even served as a backdrop for international film crews (in one case promoting an international rugby league test match between the New Zealand Kiwis and the Great Britain Lions), symbolic of the city’s reputation as an urban art destination.

The cans provided a unique element in Christchurch’s urban art collection, distinct from the larger, flat wall murals throughout the city, not only in their curved forms, but also as evolving, interactive propositions, inviting people to creatively contribute to the urban landscape.  Perhaps that is why it was such a sting when the cans were deconstructed and moved into storage offsite, their future home uncertain.  Other fixtures from the site, such as the climbing rocks, have already been relocated, but the cans present a more challenging opportunity.  Conversations are underway regarding a new home for the giant cans, and hopefully in 2022 we will see these unique installations returned to the urban landscape, because if they remain in pieces, the city will have lost a truly unique part of its urban art story.