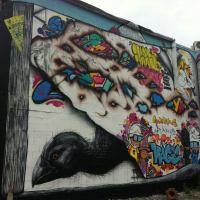 With news of the potential return of a major street art festival, it seems fitting to reflect on some significant milestones in post-quake Ōtautahi’s urban art trajectory. With support from the Government’s Covid Regional Events Fund and the group ARCC (Action Reaction Central Christchurch) raising additional capital, the March 2022 festival will be Christchurch’s first major urban art festival since 2017. Between 2013 and 2017, Christchurch became a destination for such events, the likes of Rise and Spectrum treating local audiences to blockbuster exhibitions while internationally renowned artists transformed walls across the city.

Pre-quake, Ōtautahi had no real history of ‘street art festivals’; although more graffiti-centric projects provided some precedence, they were smaller in scale. The first event to take place in the post-quake landscape was From the Ground Up, organised by artists Jacob Yikes, Holly Ross and Leeya Warrander in late 2013. An artist-centric festival, Askew One, Misery and Berst highlighted the impressive line-up of some of Aotearoa’s most celebrated urban creatives, mixing with local talent on large murals and collaborative productions throughout the central city and Sydenham.

Although responsible for some stunning productions, From the Ground Up was somewhat overshadowed by Rise, which took over the Canterbury Museum just days later.  Built around the Oi YOU! collection of Banksy pieces, the transformation of the Museum’s main hall into a graffiti and street art-filled streetscape attracted a record number of visitors. In addition to the exhibition, artists such as Roa and Anthony Lister added to the city’s already growing mural collection with large public works. Rise gained widespread recognition and remains a landmark event in Christchurch’s urban art narrative, with its enduring presence inside the Museum highlighted in 2021.

Following the success of Rise, Oi YOU!’s inevitable follow-up shows were re-branded under the moniker Spectrum, shifting location to the repurposed recreation space at the YMCA on Hereford Street.  The Spectrum festivals saw more artists converge on the city between 2014 and 2016, including the likes of Jorge Rodriguez-Gerada and Tilt.  The shows once again proved popular, and plans were in place for a permanent street art museum to be instituted at the YMCA. However, the plan never came to fruition as the relationship frayed, also bringing an end to the Spectrum events.  In 2017, the YMCA partnered with the North Island-based organisation Street Prints to present the mural festival Street Prints Ōtautahi, producing a dozen murals from the central city to New Brighton and Lyttelton.  Notably, outside of the young ‘apprentices’ paired with the headline artists, the roster included no local talent, a result of the fractured relationship between Oi YOU! and the YMCA. While Street Prints produced some of the city’s most popular murals, it ultimately proved one-and-done, not returning in following years.

Since 2017, despite significant individual mural projects and smaller events such as the SALT District’s Highlight street party in 2019, Christchurch has seen nothing of the scale and significance of these earlier festivals.  But the return of a new festival is cause for excitement as Ōtautahi grapples with the evolving presence of urban art in the city.

It is easy to see the legacy of Rise and Spectrum in the murals that have become icons of the city, but that ignores another vital impact. The importance of high-profile artists working in the city is notable not just for the wider audience exposure and the leverage gained for promotion, but also for the energy that infiltrates the local urban art community, especially as younger artists encounter influential figures and create new networks of opportunity.

This sense of validation and potential strengthens the local culture, creating a deeper community of artists beyond the city’s more established figures. Recalling the sense of camaraderie evident from my own involvement in the 2014 Spectrum exhibition, it is exciting to think that energy will return to Ōtautahi, a city already home to a diverse and engaged urban art community that will surely benefit.